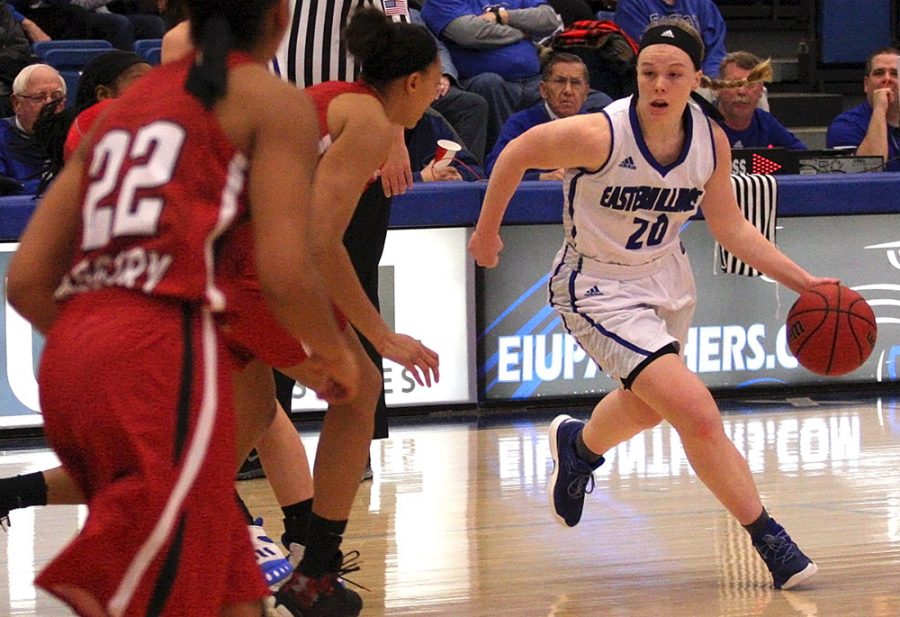 Sophomore Danielle Berry dribbles the basketball at the top of the key Saturday in the Panthers 69-59 loss to Austin Peay at Lantz Arena.

The Eastern women’s basketball team will be trying to end the two game losing streak its on when it hosts Tennessee Tech this Saturday at Lantz Arena.

This is an important stretch for the Panthers who have six games remaining and are currently second to last in the Ohio Valley Conference. Although they sit near the bottom of the conference, Eastern is only a game behind the No. 8 Tennessee State. The Panthers did not help themselves on Wednesday night when they fell 69-58 to Tennessee State, giving them the tiebreaker. Eastern is currently 7-15 overall and 3-7 in the OVC.

Sophomore Carmen Tellez was red hot from the 3-point line for the Panthers on Wednesday night. Tellez was 6-for-10 from beyond the arc and finished with a team high 18 points along with four steals. It took awhile for her to get going, but junior Grace Lennox finished with 17 points and six assists against Tennessee State. The streak of double-doubles ended for senior Erica Brown, she finished with eight points and six rebounds.

Lennox is the Panthers leading scorer with 15.9 points per game, followed by Brown (11.5) and freshman Allison Van Dyke (10.2). Brown has been a major contributor to the teams rebounding, which has been lacking recently. She leads the team with 8.2 rebounds per game. Eastern has been effective in its shot taking and is second in the conference in field goal percentage.

Tennessee Tech comes into this game on a two game winning streak with wins over Eastern Kentucky and Tennessee-Martin at home. The Golden Eagles are 9-14 overall and 6-4 in the OVC. They are in third place in the OVC right now behind Belmont and Morehead State.

Tennessee Tech survived a close one with a 53-51 victory over Eastern Kentucky and then handled business against Tennessee-Martin with an 81-71 win. In the win over Tennessee-Martin, the Golden Eagles had four of their five starters reach double-digits.

Treyvonna Brooks led the team with 22 points and added three rebounds and three assists. Yaktavia Hickson (19), Akia Harris (13) and Hannah Goolsby (13) were the others to reach double figures. Goolsby had nine rebounds and Harris and Hickson each had six assists. Tennessee Tech brought just three players off the bench in the game.

Hickson and Brooks each average double figures with Hickson averagings 17 points per game and Brooks averaging 10.9. Brooks is the team’s leading rebounder with 6.4 rebounds a game. Tennessee Tech averages 62.8 points a game, while Eastern averages 66.5.

The two teams met just once last season and Tennessee Tech came out victorious at home with an 81-74 win. Tennessee Tech leads the all-time series against Eastern 25-15. They will only meet once again this year and it is this Saturday at 1 p.m. to start off the doubleheader of basketball at Lantz Arena.