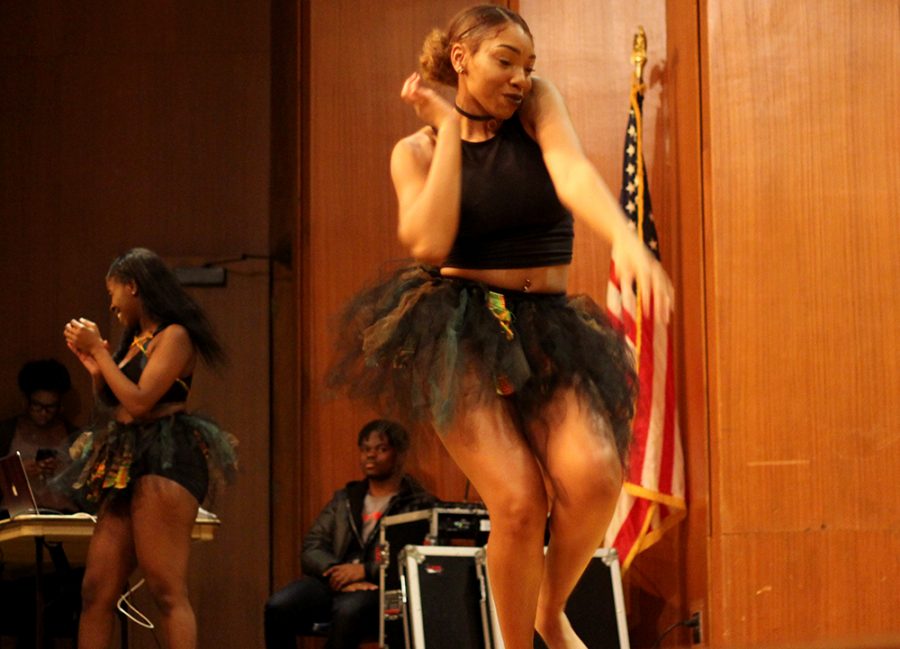 Brianna Torrance, a freshman family consumer sciences major, dances with the African Student Association Wednesday night at the comedy show as part of the kick off for African-American Heritage Month. ASA performed a combination of traditional African and modern dances and opened up for Xclusive the Comedian.

Students, faculty, community members and visitors took a walk through history and found themselves surrounded by “the Power of the Black Millennial” as they kicked off African-American Heritage Month in the Grand Ballroom of the Martin Luther King Jr. University Union.

Nia Douglas, comedy coordinator for the University Board, which put the celebration together, based the theme of the night on her definition of “The Black Millennial.”

“Our fight isn’t over, we took it and changed the rules, although they still exist, we’re going to change them. We invent music, dances, we’re using what we know,” she said.

Douglas said the event was a way of networking and showing the talent of black students.

“Sometimes we’re pushed to the back and looked at in a negative way and I want to show something positive,” she said. “Instead of hearing things about us dying, we’re here to showcase our talents.”

After working with students to put together events for six years, this is the first year Yolanda Williams, an academic adviser for the Gateway program, is organizing the month-long celebration without a budget and without a student committee.

“That was sad to me because I couldn’t do the month that I wanted to do,” Williams said.

Williams said the lack of finances from the university makes her sad.

Despite the challenge, Williams said her students who volunteered and gave their time and efforts in planning the event pulled through.

“I’m really happy about that because (the student volunteers) are not seeing it as we have no money, they’re seeing it as ‘OK we’re just going to do it,’ and that made me very proud,” she said.

Cydne Garrett, mainstage coordinator for the University Board, said the campus community has a lot of creativity to show to the world.

Using both ballrooms in the Union, participants spent the first half of the three-hour celebration observing student-made artwork depicting the power as well as the struggle of African-American citizens.

Poetry, music performances and presentations entertained and enlightened members of the audience in the second hour.

Performances such as “Dreams of 5th Street Diner” acted out by Deja Dade, a junior theatre arts major and “Hero” sung by Taleiya Baker, a sociology major, brought cheers and tears from audience members.

Malik Brown, whose stage name is “Fadah,” is a poet who has been waiting to release his poem “Watts Rios,” and performed it in front of an audience who could relate to him and his struggles.

The celebration wrapped up with a comedy show in the Grand Ballroom. Kenneth Paryo, a comedian from North Atlanta, Ga., entertained audience members with a blend of humor, robotic dances and stories acted out with musical narration.

“It feels great to be black,” he said. “I’m honored to be a part of black history events so I can use my voice to inspire other people who may need that push to follow their dream…I know it may be rough, but I promise it’s worth it.”

There will be more events throughout the month of February celebrating African-American Heritage Month.