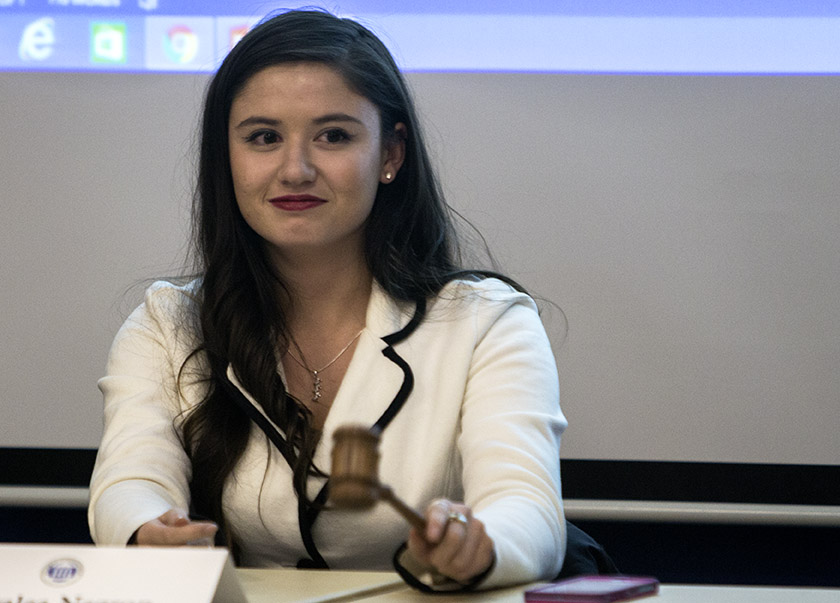 Felicia Wagner adjourns her first meeting as speaker of the student senate. Wagner was elected in an almost unanimous decision during Wednesday nights student senate meeting.

The student senate almost unanimously voted to make Senator Felicia Wagner the new speaker of the senate at their meeting Wednesday.

Maralea Negron, the executive vice president of the student senate, told her fellow peers in the senate to focus on the candidates themselves and what they represent as an individual.

“No matter how this election goes, the success of the senate as a whole is not just because of one person, it’s because of all of us. We have to work together whether you agree or disagree with who is selected,” Negron said.

Student body President Catie Witt said it is important to think about which candidate can best address everyone in a professional manner.

Student Senator Edwyn Mitchell said one of his biggest fears as a member of the Student Government is for someone to get elected as speaker and not carry out their plans.

As the discussion continued, Smith and Wagner both presented their final thoughts.

“If selected (as) speaker, I’m going to make sure that the foundation is laid to make sure my ideas are carried out,” Smith said. “I’ve been around to see what works and what doesn’t and I know that with our current foundation, there are a lot of things that will not work.”

Wagner said while Smith does have a lot of experience in Student Government, she herself does too.

“I have a lot of experience outside of Student Government. I’m in many other organizations and I’ve done internships and have been very involved with the community,” Wagner said.

Wagner is currently a part of Tri Sigma, Phi Beta Lambda, or the Future Business Leaders of America and the American Marketing Association.

The newly-elected Wagner is a junior marketing major who has been involved in Student Government for a semester.

Wagner said she joined because she wanted to make a change, and she realized being involved in the student senate is a great way to make a positive impact on campus.

“There’s a lot of things in student senate that I felt like we could’ve done better at last semester and I feel like speaker is the root of it all, because they’re in charge of overseeing all of the committees,” Wagner said. “That really inspired me because I feel like I have a lot of great ideas and I am very passionate about helping everyone.”

Wagner said she is excited and is passionate about Eastern.

“It’s so incredibly nice to represent the student body. I’m looking forward to it,” she said.