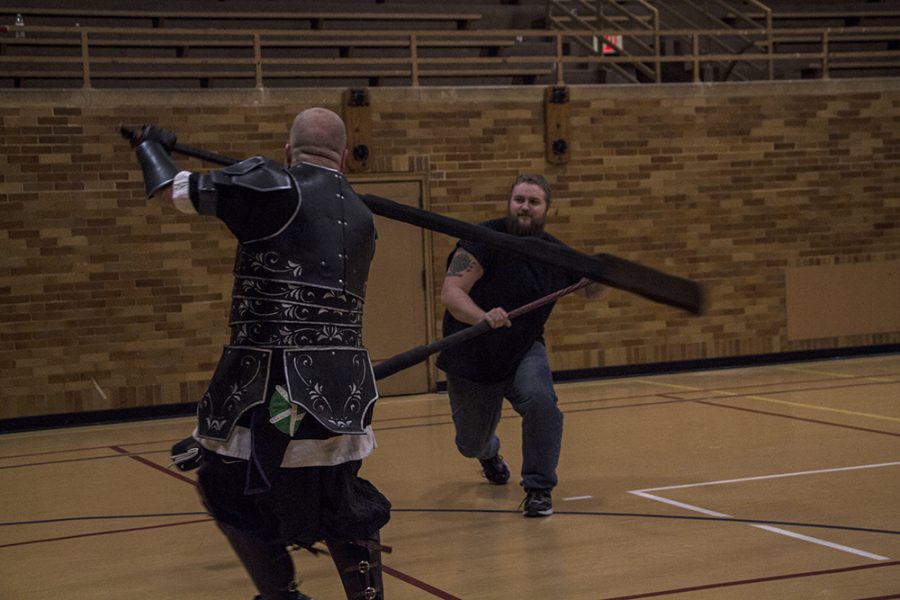 Edit: A previous version of this story inaccurately referred to Belegarth as a form of live action role-playing, or LARPing. Belegarth is distinct from LARPing in that it emphasizes medieval-style combat rather than role-playing. The News regrets the error.

As several people chat among themselves beside a stage strewn with bags, two bulky, bearded men take to the McAfee Gym floor.

Both wielding shields of leather and foam, they take turns swinging at each other with foam swords longer than the men are tall.

This is Belegarth, the sword-fighting sport somewhat akin to live-action roleplaying or LARPing, that has sprung up across the nation in recent years. Different groups, called realms, practice and compete with each other.

Weapons are identified as colors for simplicity, with blue representing one that can be wielded with one hand, red representing a two-handed blade and green representing a weapon that is safe to stab with.

The sword meets the other man’s shield, a black chunk of leather marked with an eye-like symbol, a small drawing of a pig and the words “My Name is Mudd™.”

Welton’s strike fails to hit its mark, and Alex “Mudd” McCune is untouched, as is his leather armor, bits of which are over 50 years old.

Eastern’s club, the Realm of Endrik, is preparing to host different universities from across the state at a competition in March.

“Weapons up,” Iulia Ionescu, first-time president of the Realm of Endrik, shouted at a recent meeting.

A dozen foam weapons – including an axe – are lifted into the air.

At Ionescu’s piercing bellow, leather hits leather in all-out “war.” People are ducking and sidestepping blows, laughing and chattering. Each soldier, once hit, either ducks out or sits down, and the last two men standing are deemed captains for the night.

“Nerd,” armor-clad McCune taunts his street-clothed opponent, lifting his shield to defend himself from retaliatory jabs.

One particularly chatty second-grader, Isabella, munches on a baggie of strawberry Frosted Mini-Wheats and reluctantly works on her homework as she watches her father, Matt “Grak” Grigg, duke it out with a fiberglass-and-foam sword.

She gets a kick out of questioning club member Cody Neal as he takes a breather with a sword balanced on his head.

The fight continues in a stalemate and Ionescu calls out to her soldiers in playful impatience.

“Are you all still alive?” she shouts. “Kill each other! Hurry up and die!”

McCune dubs them all nerds.

Isabella said McCune is being mean, adding that she does not want to be a nerd.

Eventually, Ionescu separates the Realm of Endrik into pairs, and, unable to decide on a winner, declares “some team won.”

She groups new, inexperienced members with the veterans and has the fresh-faced novices switch off from time to time.

At this time, veterans McCune, Conrad, Giffin and Grigg remain where they stand.

“I’ve been playing for a long time,” said McCune, who is from England.

Conrad has been fighting since 2008, something that stems from his love of martial arts as a child.

Giffin has participated in Belegarth for 13 or 14 years, but none of the veteran members have anything on Grigg, who has been fighting for over 20 years.

The Realm of Endrik meets at 5 p.m. Mondays and Fridays in either the library quad or McAfee Gym, depending on the weather.