Win streak comes to an end for women against SIUE 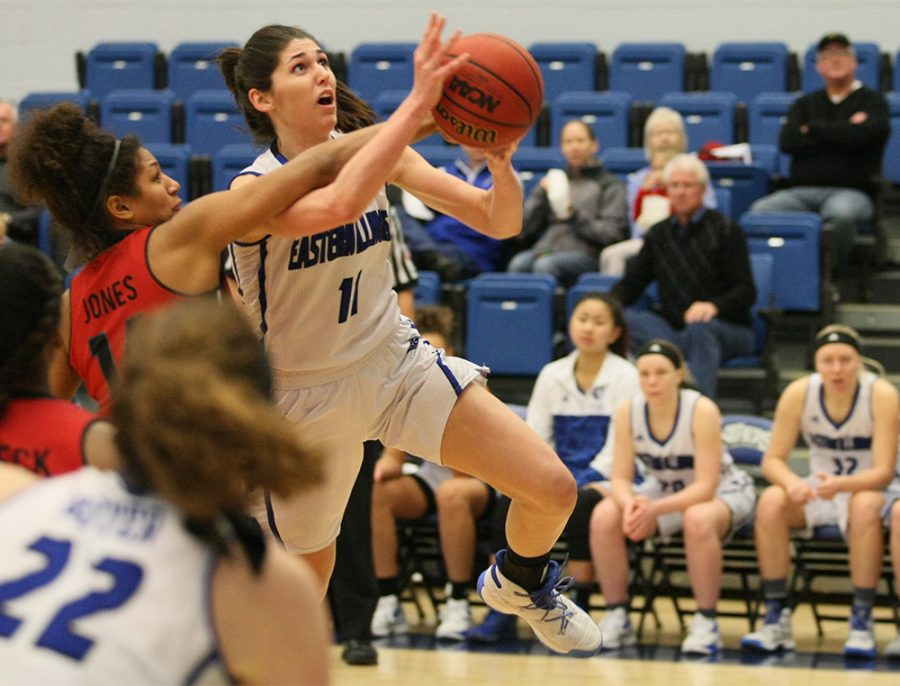 Senior Erica Brown gets fouled by a SIUE defender late in the second half.

The Eastern women’s basketball team was beaten by a strong second half by the Southern Illinois Edwardsville Cougars on Saturday afternoon.

The Cougars played to their strengths on Saturday and it turned into a 75-59 victory. The strengths for Southern Illinois Edwardsville is that they are tough and physical and that showed when they outrebounded the Panthers 38-28. The Cougars also dominated the paint where they outscored Eastern 42-24.

Junior Grace Lennox had a team high 17 points along with five assists and three steals. Lennox could feel the physical presence of the Cougars throughout the game.

“They are a big physical team. I felt it trying to box some of them out, it was pretty tough, but we’ve worked on it,” Lennox said. “We worked on it all week and we knew they were going to be like that and I guess we did not change what we were doing to make sure they didn’t out physical us.”

With the loss, Eastern falls to 7-14 on the season and 3-6 in Ohio Valley Conference play. Southern Illinois Edwardsville improves to 9-13 and 5-4 in the OVC. Throughout the first half, Eastern stuck with the Cougars and it was back and forth with multiple lead changes. The game was tied five times and had seven lead changes in the first quarter.

Eastern shot 53 percent in the first half and Southern Illinois Edwardsville was shooting just 40 percent. Sophomore Brittin Boyer hit a last second layup at the halftime buzzer to make it 29-28 in favor of the Cougars going into the half.

The second half is where the Cougars pulled away as they shot 63 percent. Southern Illinois Edwardsville opened up the third period on a 6-0 run and after back-to-back makes by senior Erica Brown, the Cougars went on a 11-2 run.

Eastern cut into the deficit towards the end of the third and made it 48-41 heading into the final quarter. It did not get much better from there, the Cougars shot 71 percent in the fourth and pushed the lead to as much as 17. Eastern could not get the offense going, shooting just 33 percent.

The Panthers were 2-for-17 from the 3-point line on Saturday. Eastern coach Debbie Black said that she thought they were taking good shots on Saturday, but could not get them to go in.

Next up for the Panthers is a road matchup against Tennessee State at 5:30 p.m. on Wednesday.