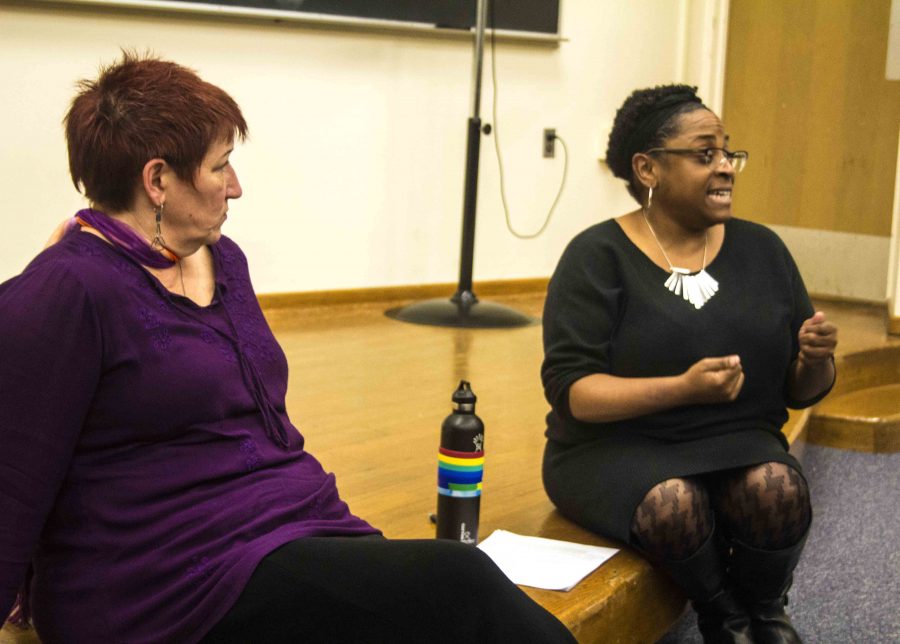 Jeannie Ludlow, a professor of women's studies and Yolanda Williams, an academic advisor answer questions on abortion at the discussion after the viewing of the film "Silent Choices." Williams addresses how the issues affect to African American community.

A discussion about the problems in African American communities in regards to abortion followed the documentary “Silent Choices” Tuesday night in Coleman Auditorium and was led by Jeannie Ludlow, the coordinator of Women’s Studies, and academic adviser Yolanda Williams.

Ludlow and Williams engaged with the audience to discuss why abortion and speaking out about abortion are such important issues for black women.

The president of EIU FEM, Maya Lee, said staying silent makes it harder for women to find resources, which will cause internalized problems when society deems a woman evil for having an abortion.

Williams said Christianity in the black community plays a huge role when women decide what to do after they become pregnant. She said women in the African American community often do not talk about abortion because they are afraid of being judged by God and people in their church.

Williams said she had no idea that she knew sorority sisters, family and friends who have had abortions until they finally opened up about it.

Ludlow, the adviser of EIU FEM, said she has worked at two abortion clinics, one in Peoria during a summer and one in Ohio for over 12 years. She said women would come in and tell her they knew they would go to hell if they chose to have an abortion. From there, Ludlow would encourage the women to respond to the following: “Tell me what they say in your church about forgiveness.”

The verses in the Bible can be interpreted a thousand different ways, Williams said. The Bible is not a definitive instruction book for how people should live their lives, she said.

Williams said silence kills the black community when it comes to incest, rape, depression or homosexuality. She said they ignore the problem altogether and tell each other to go speak with a pastor and pray.

Those in poverty account for 58% of abortions in the United States, and 61% of those who choose to have an abortion are already mother, Ludlow said. She said being a mom is the hardest thing she has ever done, yet the most beautiful thing.

“There is no beauty that comes with the hardship if you don’t want kids,” Ludlow said.

Williams said she understands how women with support can decide not to have an abortion, but it is just that; they have support from other people.