New play to bring contemporary issues to the stage 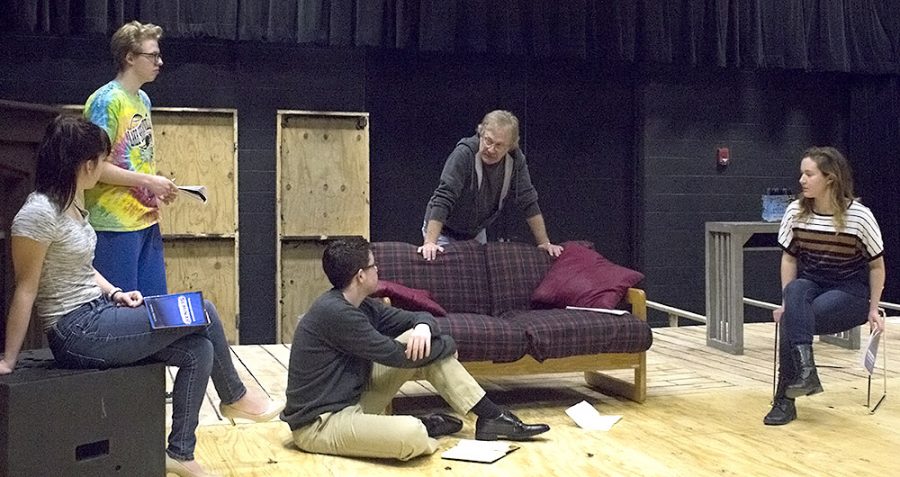 The cast members of the play “Seminar” look to Gary Ambler, center, as they rehearse their lines Tuesday afternoon at the Black Box Theatre in Doudna Fine Arts Center. The cast rehearses six days a week in preparation for the play that begins on March 1.

The cast and crew of the play “Seminar” is hoping to expose its audience to a more contemporary play March 1-5 at the Black Box in Doudna.

Director Kevin Doolen said the author of the play, Theresa Rebeck, speaks about women’s issues like the roles of women in society and in the workplace.

“I am a strong believer and supporter of diversity,” Doolen said.

“I think it is important to have a contemporary woman’s voice in our theater season; no season should go without at least one diverse voice,” he said.

Doolen said the characters in “Seminar” are a group of success-hungry students studying creative writing.

The play takes place in an Upper West Side apartment in Manhattan and concerns four young writers who each pay $5,000 to take a seminar with a seasoned author.

Doolen said he thinks that the play is relatable to Eastern students because it contains adult issues and content.

Doolen added that, the characters in the play are very well educated, and the play includes a lot of literary references, which means the cast is doing outside research on these elements.

English professor and dramaturge Christopher Wixson said he provides research to the director and actors so they better understand the script.

“I helped the creative team unpack a lot of literary allusions in the script, as well as references to the culture of writing and publishing in New York,” Wixson said.

Wixson said the cast members all collaborate to tell the story truthfully and compellingly.

“It’s fun to do contemporary work because theater is at its most relevant because it is dealing with topical issues and important issues and voices that speak to the younger generation,” Doolen said.

Walker said she was hoping for the role of Kate when she auditioned.

“Kate is intelligent and kind, but she can also be sarcastic and a complete mess at times, so she’s extremely relatable,” Walker said.

Walker said Kate is a highly educated, classical writer who has a hard time dealing with criticism. The seminar changes how Kate sees herself, her talents and her peers.

Doolen said he set up the auditions for “Seminar” to see how hard the students would fight for a role, which also correlates with the character’s personalities in the play.

He said that it was interesting to the students get intimidated during auditions by Gary Ambler, an alumnus of Eastern that will be playing the role of Leonard in the show.

Doolen said he could have cast the show four times and each of the casts would have done great with the show.