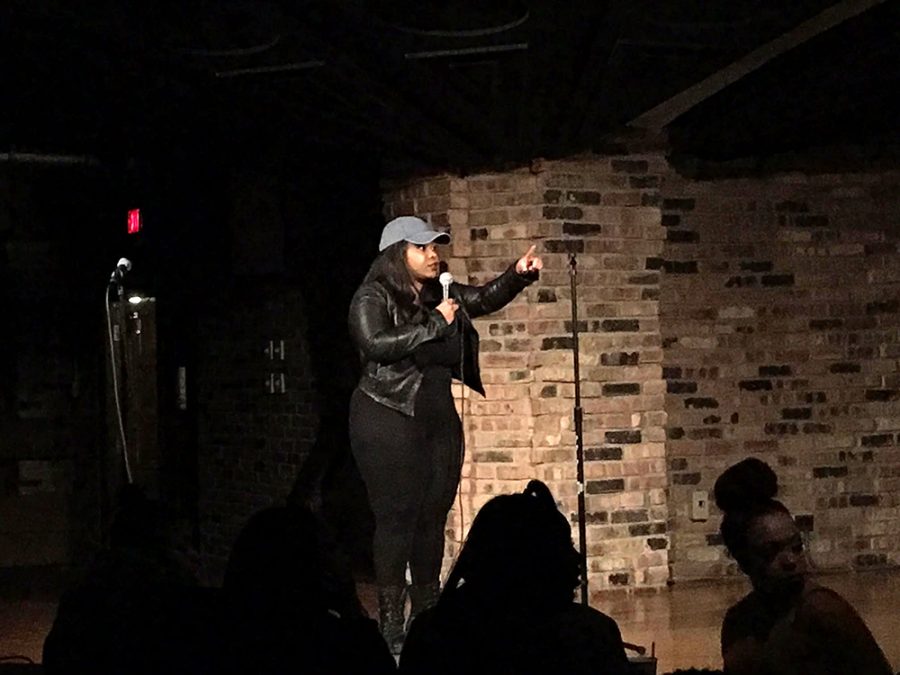 Host and MC of the night Deja Dave gets the crowd involved during brief intermissions.

Students shared their Ode to 2017 by poetry, rapping and singing with a full audience at the open mic night Thursday at 7th Street Underground.

There were roughly 25 performers for the night, including many poets, rappers, singers, one tap dancer and a motivational speaker.

Freshman theatre arts major Brezzy Byrd performed a poem written by one of his friends who is deceased.

“It was one of my friend’s poems that he wrote and I decided to perform it in remembrance of him,” Byrd said.

Byrd said that this was his first time being on stage performing but said he is also an actor in the TV shows “Empire” and “Shameless.”

He said that he started acting in “Empire” last year when he auditioned with a casting company.

“I plan on being an actor one day and hopefully having my own movie,” he added.

Freshman English major Ja’Wan Emmons performed an original piece of poetry that he said he wrote his senior year of high school.

“This was my first time being here, and it was a good experience,” Emmons said.

His original piece of poetry featured the concept of being in love, comparing a girl to a pencil and going through the alphabet in a poetic manner.

While some were new to the stage, sophomore community health major Derek Rios was not.

“The first time I got on stage was last year around October,” Rios said.

Rios said that he started writing original songs when he was a junior in high school.

Rios performed and rapped an original song and thought that him performing started by events similar to the Ode to 2017.

Rios performed at the open mic night last semester and opened for Stunt Taylor on Jan. 7.

Rios said that he will be performing at the next open mic night and can be found on various social media sites.

Bersamin and the crew members were in charge of the sound and technology of the show and accommodated the performers with their tracks and sound levels.

Senior marketing major and event coordinator Cydne Garrett asked the performers what order they would like to perform in as they arrived.

“I want them to feel comfortable,” she said.

Before the performances started, there were refreshments, food and interactive games.

Audience members filled out a questionnaire, which was then put into a drawing to win prizes throughout the night.

During the event, the audience was encouraged to tweet their personal odes to 2017 with the hashtags #ubmainstage and #odeto2017.

These tweets were read in between the performances, along with the drawings for the prizes from the previously submitted questionnaires.

Many of these tweets mentioned the students wanting to focus on their goals, raise their GPA, be more outgoing and stop procrastinating.