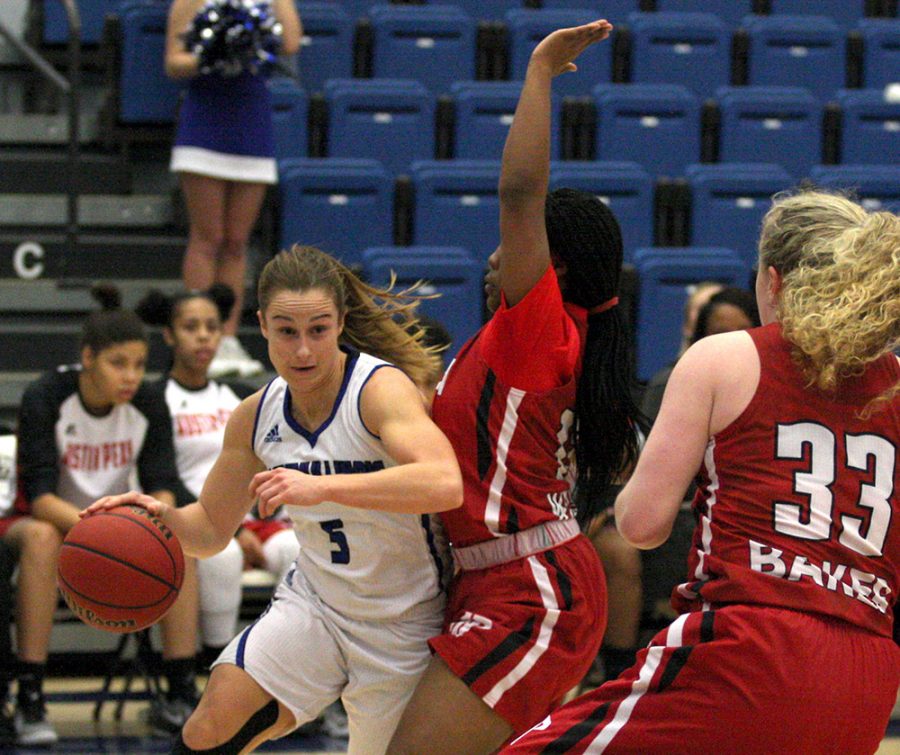 Junior Grace Lennox drives at the basket against an Austin Peay defender Saturday at Lantz Arena. Lennox led all scorers with 22 points in the Panthers’ 69-59 loss to the OVC conference opponent.

A great start to the game was quickly forgotten in the second half of the Eastern women’s basketball game against Austin Peay on Saturday.

The Panthers shot 51.7 percent in the first half and took a 34-25 lead before the offense disappeared resulting in a 69-59 loss.

With the loss, Eastern falls to 5-13 overall and 1-5 against the Ohio Valley Conference. Austin Peay improves to 9-10 and 3-3 in the OVC.

Eastern coach Debbie Black went with a different lineup on Saturday with sophomore Brittin Boyer and freshman Zharia Lenior getting their first starts of the season. Boyer finished with 18 points and Lenoir had four rebounds, three assist and three steals in her first career start.

Black’s decision to start those two was for better defense and more length.

“I thought maybe our length would bother them and it proved to work out in the first half we really just didn’t finish the game,” Black said. “We played maybe 23 minutes of basketball.”

Junior Grace Lennox led all scorers in the game with 22 points along with three assists to continue her impressive stat sheet in conference play. Eastern opened up the game on a 13-2 run and the defense held Austin Peay in check as they shot just 26 percent in the first quarter. Eastern led 17-11 at the end of the first period.

Eastern continued its impressive start to the game in the second quarter starting with an 8-1 run to take a double-digit lead. The Panthers took their biggest lead of the day midway through the second when they went up 28-16.

The second half was all Austin Peay, beginning with a 7-0 run to tie the game up at 38 and eventually took their first lead of the game with three minutes left in the third quarter. A basket by Lennox in the final seconds of the third gave Eastern the lead 50-48 heading into the final quarter.

Boyer said that Austin Peay was the one throwing the punches in the second half.

The fourth quarter was one to forget for the Panthers who shot just 28 percent and let Austin Peay run away with the game. Austin Peay went on a 14-1 run to begin the fourth, taking advantage of the lack of offense for the Panthers. Eastern was outscored 21-9 in the final period.

After the tough loss, Black said the team needs to start thinking they can get these kind of wins.

“These guys have to start to believe that they can win these games,” Black said.

The Panthers will be home again this Wednesday when they welcome Tennessee-Martin to Lantz Arena at 6 p.m.