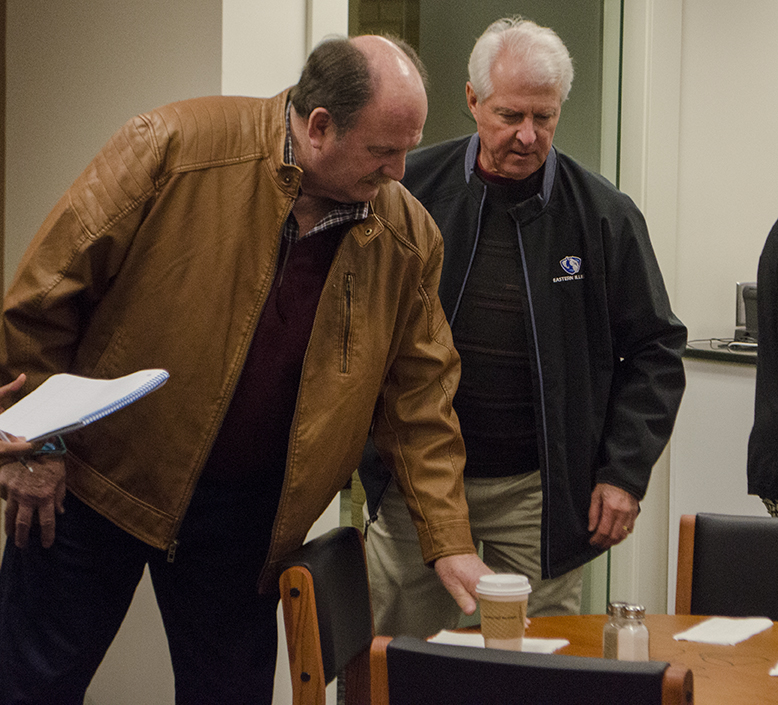 Mike Shelton, left, looks over the new furniture he donated in to the cafe of Klehm Hall Wednesday afternoon. Shelton donated the furniture in memory of his wife, Linda, an Eastern alumnus and also was on the hospitality advisory board at Eastern.

Husband and donor Mike Shelton said he started a memorial fund, so he could purchase furniture that would show her legacy and personality forever.

“She was larger than life. She would walk into a room and take charge,” Mike Shelton said. “You didn’t get to know Linda; you experienced her.”

Shelton said his wife was a woman who lived and breathed hospitality, a skill she developed at an early age by running the cash register for her father’s restaurant in Charleston.

According to an obituary from Butler Funeral Homes, Linda Warmoth Shelton graduated from Eastern in 1972, where she served on the Hospitality Advisory Board. Later, she became the vice president of sales and marketing at the Crowne Plaza.

“She never knew such a thing as a stranger,” Mike Shelton said. “Everybody knew Linda. That’s why she was so successful at the Crowne Plaza.”

Jeanne Lord, associate dean of the College of Business and Applied Sciences, said the room is transformed by the new furniture.

“Before it was square tables. It was just very plain, but now it’s so much more inviting. It has a café feel and is definitely something we can be proud of,” she said.

Mike Shelton said both the table and chairs were built from solid oak and created by inmates correctional industries. The furniture took about six to eight weeks to build. The furniture was delivered and arranged over winter break.

A canvas of a red café that hangs in the corner of The Café used to be a part of Linda Warmoth-Shelton’s office, Mike Shelton said.

“I knew she bought it at an art fair but it was upstairs in my attic and I realized that this was the perfect place for it,” he said.

The donation will help with family and consumer science department’s recruitment efforts and create a more comfortable space for meetings, Lord said.

“If students are interested in FCS majors then we will show them this space because it’s really impressive for tours. It has high visibility a lot of people visit and see the space,” she said.

Hospitality majors are responsible for creating the menu, preparing the food and serving the customers. Working in the Café is an extension of the FCS 3784 course where the students apply what they learned with managing the kitchen and waiting on the customers, family and consumer sciences professor Rick Wilkinson said.

“It’s a commercial kitchen simulation course,” he said. “It’s an additional hands-on, real world experience. We have fairly large commercial equipment and it gives them practice with working with the equipment.”

A student is placed in charge of the student workers every day, which students can gain practice in managing, supervising and problem solving, Wilkinson said.

The Café offers both cold beverages and a range of hot beverages from tea to lattes.

Each week the menu is updated and the meals generally include soups, salads and sandwiches.

Kendall Harty, senior hospitality management major, said she is thankful for the course because it helps her feel prepared for the real world.

“I think it’s established to get real world experience because it’s important that before you leave school to have the choice to work in the kitchen and the front of the house,” Harty said. “It gives you a glimpse of hospitality that you may not have known before.”

Harty said seeing the new furniture made her excited to come to class and she hopes more people will feel welcomed.

“I think it will draw more people in and hopefully (the Café) will get busy,” she said.