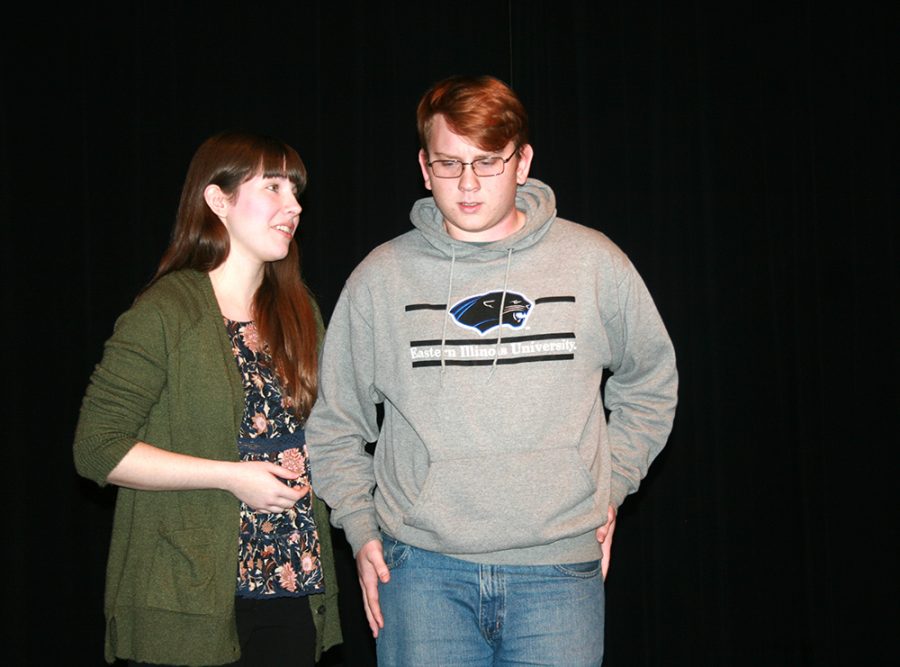 Terr, played by Autumn Frykholm, a junior, secondary english language arts major, discusses the death of her husband with Tom, played by Cullen Scurlock, sophmore chemstry education major during a practice for the play After in the doudna on thursday night.

As students prepare for their final exams and papers, advanced theatre arts students in the directing and scene design classes are preparing for four one-act plays as part of their final project for class.

The plays will be performed 2 p.m. Saturday in the Doudna Fine Arts Center’s Black Box Theatre.

The shows being presented are Eric Lane’s “Faith,” Anna Gorisch’s “The Individuality of Streetlamps,” Glenn Alterman’s “After” and David Howard’s “Electric Roses.”

“It’s definitely a challenge,” Aguilar said. “You have to work with everyone to express what your vision is.”

Phillips, a theater arts major, said one of the biggest challenges when working with others was finding a way to describe what she wanted.

“You use a lot of metaphors and pictures,” Phillips said. “(Allen) gave me a lot of ideas and at one point I forcefully had to change my vision at the last minute so that every element worked together.”

Phillips said her play “The Individuality of Streetlamps” had a simple set, but a lot of work and planning went into making sure the set reflected the script appropriately.

Aguilar, Phillips, Foglia and Alison spent time carefully picking everything out, from the scripts to their shows from play books, and had all of three weeks to hold auditions, cast their actors and get together with scene design students to map out stage lighting and sets.

The plays range from serious dramas to dark comedies. Each actor said the shows they picked were unique to them, ones where they could connect with each character and the situations they faced.

Aguilar, a theater arts and communications disorders sciences major, said her show, ‘Faith” covered heavy topics regarding religion, in which she recruited Phillip’s help to make her production authentic and realistic.

Foglia, a theater arts and education major, described her show “After” as a dark comedy with relatable characters.

Aguilar, Foglia and Phillips said the biggest challenge in finding a show was finding written characters who were both dynamic and relatable.

Aguilar, Phillips and Foglia all started out as actors in the theater department but only Aguilar had experience directing when she was active in high school theater.

All three said being actors themselves helped them work well and be more understanding with their own actors.

“It’s surprising how much you learn about acting from a directing class,” Philips said.

Each contemporary play is about one act long and contains no more than three actors. Each director did their own advertisement for auditions and coincidently casted some of the same actors for different roles in each play.

All the directors made their own rehearsal schedule, making sure time did not overlap with one another because they shared actors.

“Your show grows with the actors,” Aguilar said.

Foglia said one of her fears about the project was not being able to find the right actors or enough actors for her script. However, she also said after auditions those fears went away because her auditions went well.

After casting their productions, each director put together a director’s manual and began mapping out their individual image of their chosen script.

“You never want to put things in the script that weren’t meant to be there,” Foglia said. “A lot of the creative liberties came from my actors. They do things in a different way that I didn’t even think about.”

All four shows will be performed back-to-back. The show is free to attend and open to the public.

Disclosure: Marisa Foglia is a staff member of The Daily Eastern News