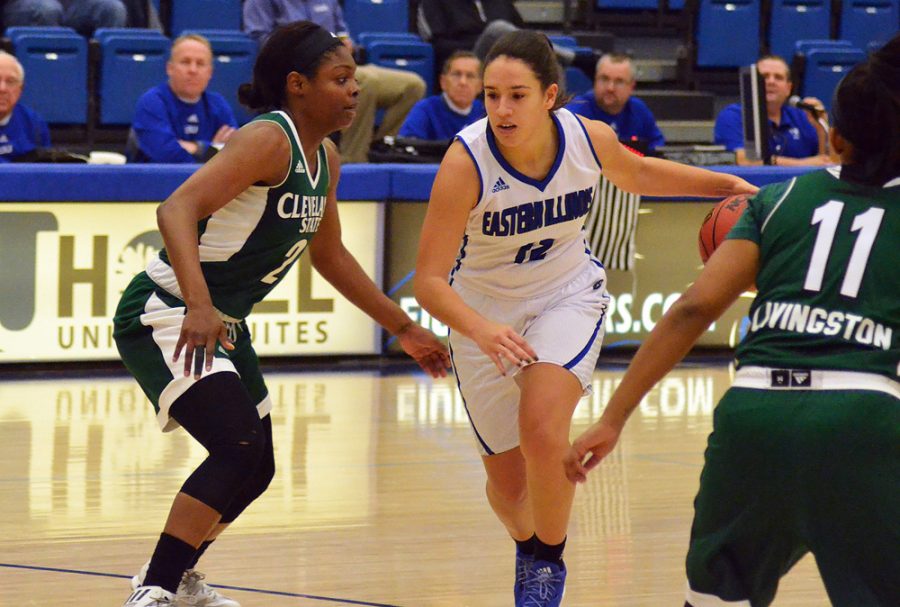 Sophomore Carmen Tellez dribbles the ball out on the top of the key Wednesday against Cleveland State. Tellez scored 12 points on a 4-for-9 effort from beyond the arc in the Panthers' 66-56 loss.

Cleveland State may have came into Lantz Arena Wednesday afternoon able to get almost whatever they wanted in the paint against the Eastern women’s basketball team, but poor shooting is what really downed the Panthers.

This was the worst shooting percentage for the Panthers this season. The Vikings scored 38 points in the paint, which led them to a 66-56 win, but Eastern shot just 28.8 percent from the field and gave up 18 points off turnovers.

Eastern coach Debbie Black said the 18 points off turnovers was too many and that they were not capitalizing off their own defensive play early on.

“They had 18 points off of our turnovers and I think that was too many,” Black said. “I think they weren’t really scoring to begin with and we weren’t capitalizing.

We started the game really well and we’ve done this a couple of times to start the game, but we’re not scoring off our good defense.”

The Panthers fell behind early in the first quarter with a shooting percentage of 25 percent while Cleveland State was shooting 62.5 percent from the field. Black said the team was well prepared for what the Vikings were going to show them.

“I don’t think they jammed it down our throat as much as they just kind of walked in our lane and scored on us,” Black said. “I think our coaches did a great job with the scouting. I think we were prepared for everything we thought we were going to see.”

Leading the Panthers was junior guard Grace Lennox with 15 points along with four assists and five steals. Senior forward Erica Brown finished with a double-double with 12 points and 10 rebounds. Brown also had three blocks.

Sophomore guard Carmen Tellez was another Panthers to finish with double-digit points ending with 12 points.

The freshmen struggled altogether for the first time this season. Allison Van Dyke was 1-11 from the field with four points, and Zharia Lenoir was 1-6 with three points. Black said it has to do with scouting and teams are now anticipating their next move.

“It’s sort of easy to be a freshman, it’s easy to be a rookie, but it’s once they start to get to know you, and they take away your strengths, they are now scouting us,” Black said.

Eastern is now 4-6 on the season, while Cleveland State improves to 4-4. The Panthers’ losing streak is now up to four and the schedule does not get much easier for them. Eastern will start a three-game road trip beginning with Western this Saturday.