Panthers dominate from beyond arc, at line in Sunday win 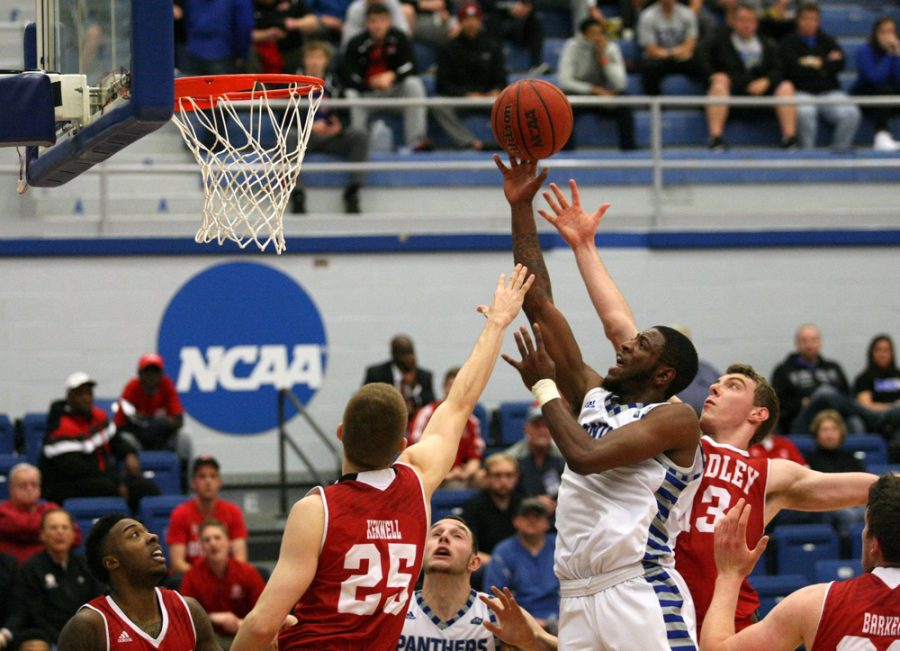 Junior wing Ray Crossland goes up for the basket during the Panthers' loss to Bradley on Tuesday in Lantz Arena.

With the help of 14 rebounds from sophomore Aboubacar Diallo off the bench, the Panthers were able to get by a tough Illinois-Chicago team Sunday, defeating the Flames 90-76.

The Panthers faced the dilemma of junior Muusa Dama getting into foul trouble and eventually fouling out. Diallo came off the bench and filled the role of Dama and gave the Panthers help down low.

Diallo played 19 minutes and brought down 14 rebounds in the game to lead all players. The Panthers outrebounded the Flames 46-37. Eastern was outrebounded by Bradley on Tuesday and coach Jay Spoonhour said winning the rebound game is a “flip of a coin” for them.

“(I’m) very pleased with the way Bouba played,” Spoonhour said. “I thought he changed the game with the way he defended.”

Diallo does not play heavy minutes for the Panthers, but his ability to come off the bench and play a role on the floor was crucial in the win.

“I think I get better every practice, because I played against Muusa all practices and everyone knows Muusa is a great player,” Diallo said. “That’s a challenge for me and gets me better.”

Eastern and Illinois-Chicago were in a tight battle through the first 13 minutes of the game, trading the lead, but when sophomore Casey Teson hit a 3-pointer to give Eastern a 21-18 lead, the Panthers never trailed again.

Tuesday’s game with Bradley seemed like a game the Panthers should have won, but they were able to make up for that Sunday.

“I thought everybody came ready to play today,” Spoonhour said. “We especially had guys who set their mind on rebounding. UIC is really talented and real young, and I thought we did a good job making things tough for them. UIC is a good team, and this is a really good road win.”

And with 14 rebounds, rebounding was definitely on Diallo’s mind.

“My coach told me (rebounding) is the key to win the game,” Diallo said. “So when I get on the court, I just focus about rebounding so I was going after every shot to get the rebound because I know that thing can help my team win the game.”

Eastern led by 13 at the end of the first half, but just five minutes into the second half, the Panthers jumped ahead by 23 with a 17-7 run.

The defense is what made the difference in the game for the Panthers. They did not force the turnovers they have in recent games, but that is not what they even look to do.

The Panthers forced just nine turnovers but played a more sound game and did not rely on the turnover to lead to a layup.

Eastern found its stroke from behind the 3-point line.

Through the first seven games, Eastern struggled a bit beyond the arc, with its most 3’s coming against Saint Louis with 10 Nov. 17.

Eastern was 12-22 Sunday at Illinois-Chicago.

Junior Montell Goodwin and junior Cornell Johnston each had four 3-pointers in the game.

Goodwin was also very reliable at the free throw line, making 7 out of 8 attempts.

Eastern made 18 out of 20 free throws, but they still sent Illinois-Chicago to the line 34 times ­— a trend that has continued since last game.