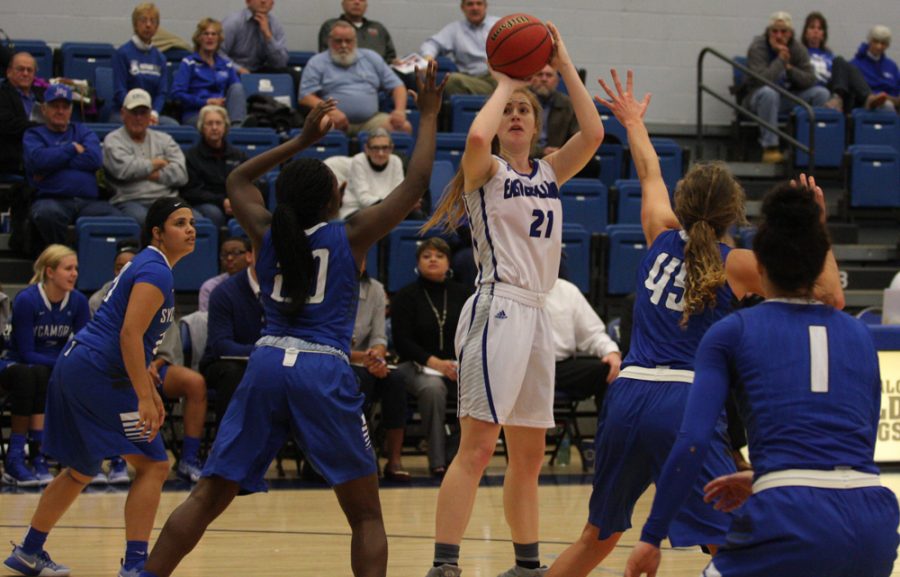 The Illinois State Redbirds used a big fourth quarter to down the Eastern women’s basketball team 60-49 on Thursday night.

The Redbirds took advantage of the Panthers’ turnovers throughout the game with 25 points off of 23 Eastern turnovers.

The story tonight for Eastern was 31-percent shooting from the field and 17 percent from beyond the arc.

The Panthers played well on defense for the majority of the game, but they could not get the offense going.

The Panthers jumped off to a 9-2 lead in the first quarter thanks to back-to-back layups from senior Erica Brown.

The Redbirds fought back with a field goal and forced a Panther turnover that turned into a 3-pointer from Megan Talbot.

The second quarter was a different story for each team.

Eastern had trouble scoring throughout the second as Illinois State started off the quarter on a 13-2 run to take a 22-18 lead.

The Panthers went five minutes without scoring before junior Jalisha Smith made a layup to make it 22-20 Illinois State.

The Panthers finished the first half shooting 31.3 percent from the field and 40 percent from beyond the arc.

Turnovers were a major problem for Eastern in the first half as 15 points from the Redbirds were off of Panther turnovers.

Eastern was only able to get two points off of six Illinois State turnovers in the first half.

Junior Grace Lennox, along with Brown and Smith all struggled from the field the first half of the game.

The start of the second half did not go that well for either team as the Redbirds went the last 7:14 of the third quarter without making a field goal going 0-11.

However, Eastern took little advantage of the field goal drought, only taking a two-point lead into the final quarter.

Illinois State stuck with Eastern by making six free throws in the final seven minutes of the third.

Illinois State came out firing in the fourth quarter with an 8-0 run to retake the lead 44-38.

The scoring run was stopped with a field goal by Brown with 7:38 left in the game.

The Redbirds really pulled away outscoring Eastern 24-11 in the fourth to seal the Panthers’ second consecutive double-digit loss.

Eastern falls to 4-4 on the season and will travel to Valparaiso for a Saturday afternoon matchup.