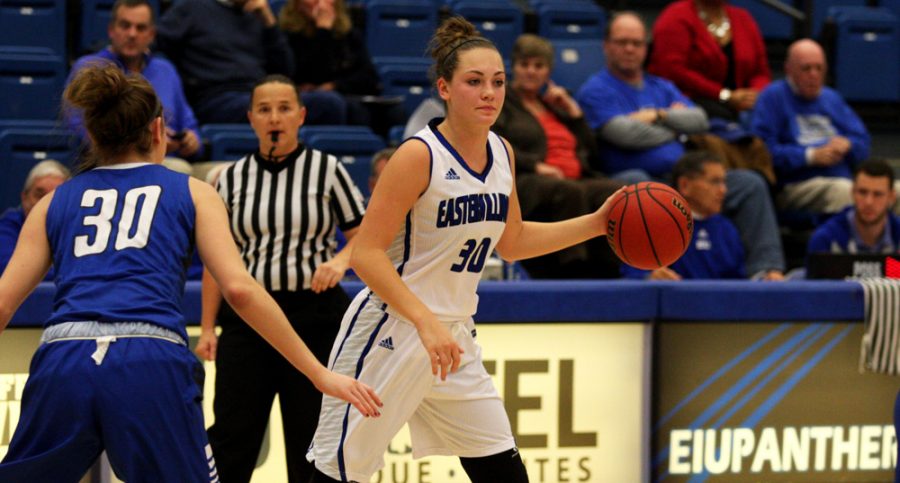 The Eastern women’s basketball team is back on the road for two games starting with the Illinois State Redbirds tonight.

Senior Taylor Stewart is the leading scorer for the Redbirds averaging 14 points along with 3.6 rebounds and 11 assists per game. Stewart is shooting 41.9 percent from the 3-point line this season. Junior Hannah Green has also been impressive averaging 10.5 points, 5.3 rebounds, 2.0 blocks and 2.3 steals per game.

Eastern coach Debbie Black said the Redbirds have the ability to shoot the 2-pointer well.

“They’re an interesting team,” Black said. “They really shoot the three ball well on some nights and they really don’t shoot the three well. They have one player in particular that we have to stop (Stewart). When she hits three’s, they win.”

Illinois State did well handling the ball in the loss to Northern Illinois with a season-low 10 turnovers. They are averaging 11.7 turnovers per game. The Panthers are averaging 15.9 turnovers per game this season. The Redbirds started a different lineup last game for the first time with freshmen Megan Talbot and Frannie Corrigan making their first career start and senior Brechelle Beachum made her first start of the year.

Eastern is coming off an 88-61 loss to Indiana State Monday night. The offense is led by junior Grace Lennox who is averaging 12.6 points, 3.9 assists and 1.7 steals per game. Freshman Allison Van Dyke has received Ohio Valley Conference Freshman of the Week each of the past two weeks and is averaging 12 points and 4.7 rebounds per game.

Black is still seeing how her team bounces back from losses this season, but the first loss this season was an early indicator.

“The big one was on the road at Stetson and we were on the road again at Florida A&M, and I thought we had a good game,” Black said. “I guess we’ll have to see how it goes, but I think today and obviously Saturday will be a good test for us.”

Black said after the Indiana State loss that when you give up 88 points, you are not going to win games. She said for Thursday night’s game they will show different defensive looks.

“We will mix up our defense,” Black said. “I think you’ll see a little more zone, a little more pressure, I liked our full-court pressure the other night, we’re going to do a little more of that.”

The game is set to tipoff at 7 p.m. at Illinois State.