Final vitalization project recommendations to be posted on website in January 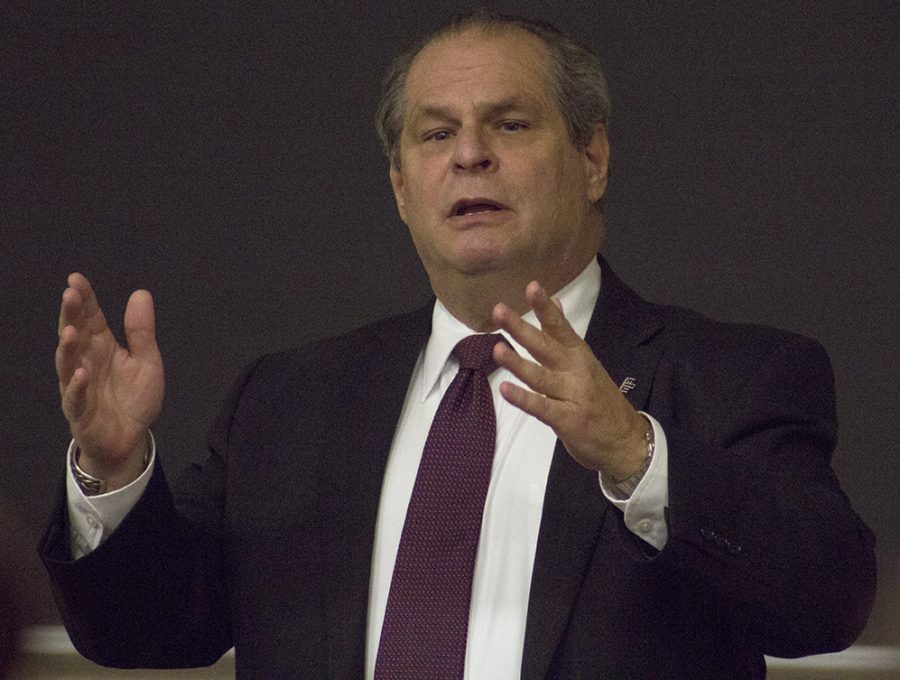 Molly Dotson | The Daily Eastern News Eastern President David Glassman explains his role in the implementation of changes following the final Workgroup recommendations, which will be submitted Thursday Dec. 15, during the all Taskforce meeting Wednesday in Coleman Auditorium.

Final recommendations from vitalization project Workgroups no.1-7 will be posted on the project’s webpage at the onset of the spring semester in January, Eastern President David Glassman announced at a meeting for the entire Task Force.

“As soon as everybody comes back for spring they will be up there,” he said.

All recommendations will be posted as they come in, Glassman said.

However, any recommendations by a Workgroup considered by the president or Task Force Chair Ryan Hendrickson to be “egregious or harmful to the university” will be retracted from the recommendation list before it is posted.

“If there’s something that’s never going to happen and it’s not anything that I believe would be in the best interest of the university to put in our website as far as recommendations, the two of us will retract that,” he said.

While Glassman said he does not anticipate this being the case, he decided to state is as a safety clause.

The recommendations posted will have the name of the Workgroup along with what the group is recommending.

The names of the people who made the recommendations or voted for or against them will not be included.

When these groups submit their final recommendations, their official charge will be over. Workgroups no.8 and 9 will keep working into the spring semester, and can ask for feedback from Workgroups no.1-7.

Neither the vice presidents’ nor the Workgroup’s recommendations will be weighted higher than the other, Glassman  said.

Any recommendation that suggests the deletion, consolidation or outsourcing of an academic or non-academic service or program will lead to Glassman meeting with the leaders of the impacted unit or department.

The affected areas will have the opportunity to provide information they believe is important for the consideration of the administration.

He said the administrative decision making and prioritizing process will also begin in January, as they begin looking at the recommendations.

Not every recommendation will be implemented, Glassman said, and the ones implemented will be based on what the administration thinks will have the greatest positive impact on the university.

“The implementations of decisions will occur on an  ongoing manner based on prioritization, timing and available resources,” he said. “It has to be a strategic, thoughtful reflection on what the vitalization project all about- efficiency in operations, making ourselves marketable and increasing enrollment.”

Glassman said the university community will be updated on all of the administration’s decisions on the vitalization project’s website.

“You will be able to follow along as decisions are implemented (and) which recommendations were essentially accepted by administration in making a decision and what decision was made relative to that recommendation,” he said.

The Board of Trustees will be informed on the decisions. Any eliminations of academic programs have to have their approval, per a contractual agreement, but they will not necessarily have to vote on other decisions.

Billy Hung, a member of Workgroup no.2, looking at university technology, asked if Glassman plans on setting up formal channels for public feedback before decisions are made.

“So far preliminary (recommendations) have gone out through the VP’s to the impacted units,” Hung said. “The time frame is pretty tight and not everyone even in the impacted units have had chance to provide the feedback they wanted to.”

Glassman said anybody can review the final recommendations and provide responses individually or as a group.

Now, in the final weeks of the semester, Workgroups no.1-7 will begin to review responses prepared by impacted departments after they saw the preliminary recommendations.

The groups will then reassess their recommendations based on these responses and can request more data or information that will assist them.

Workgroups will then consider whether to reaffirm their preliminary recommendation, modify it based on the additional information or delete it all together.

The Workgroups are also able to add new recommendations, but they will need to list these on a new page of their report.

“That page has to be marked clearly that these are new recommendations, not one’s first developed at the preliminary stages,” Glassman said.