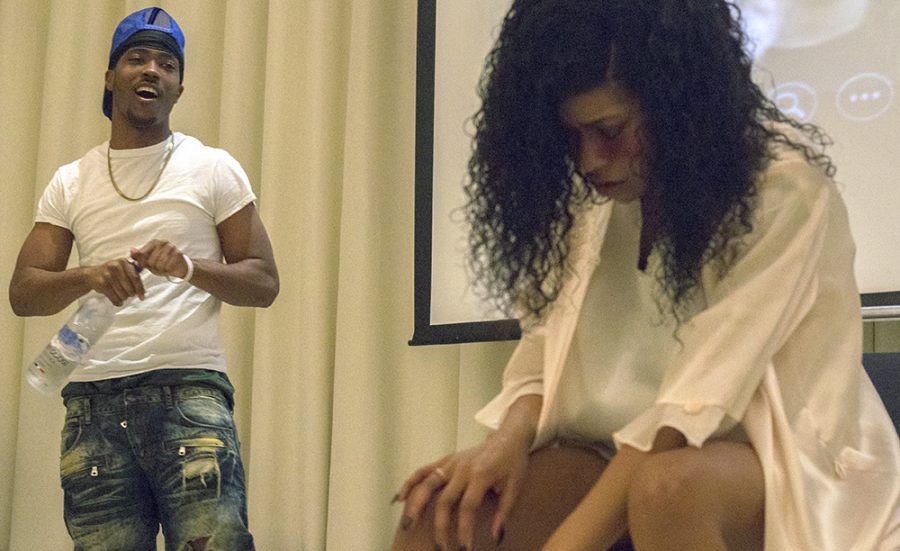 Christian Johnson, a sophomore secondary education major, plays a mentally and physically abusive partner while Keyana Latimer, a junior sociology major, plays the victim of this abuse, as part of a creative monolgue, during the “Hear My Cry” event Monday in the University Ballroom of the Martin Luther King Jr. University Union.

As incidents of police striking down African-Americans continue to breach the public eye, an academic advisor for Eastern’s Gateway Program stated Monday for fairer representation within the media.

“There’s an African proverb that states, ‘Until the story of the hunt is told by the lion, the tale of the hunt will always glorify the hunter,’” Yolanda Williams, academic advisor, said in a speech during the second annual “Hear My Cry” event Monday night.

“Hear My Cry,” hosted by the National Association of Colored Women’s Club, focuses on the stories of black women harmed or slain by police, including Naperville resident Sandra Bland, who died in a jail cell in Texas after being arrested on a traffic violation.

“The story is always going to be one-sided,” Williams said. “So until the history of Africa is told by Africans, the story of greatness will always glorify imperialists – the white people.”

Asked who was telling their stories, the audience chimed in with responses of “media” and “others,” but the answer on Williams’ tongue was “the lion.”

“With access to social media, we are being able to tell our own stories,” Williams said, “And where sometimes our stories, to us, seem to be cut and dry, to others – the police, white people, the media – our stories are deemed more complex or complicated because our stories are muddied with how others perceive us and our own reality.”

Despite this, Williams pointed the audience to The Counted, an interactive database of people killed by the police in the United States in 2015 and thus far in 2016.

Williams said the information The Counted provides is crucial knowledge.

“Hear My Cry” also featured a performance highlighting the troubles of an abusive relationship and tributes to multiple female victims, ending with a moment of silence.

The NACWC goes by the motto of “uplifting women and youth” and is a new club on campus. Community health major Shantel Hatcher, the club’s public relations chair, said they aim to develop bonds within the community.

Corporate communication major Kendall Hurst added that they also aim to bring the community closer. Their efforts include frequent community service, and they will be hosting a taffy apple fundraiser Wednesday.

“It’s all about giving back,” Hurst said.