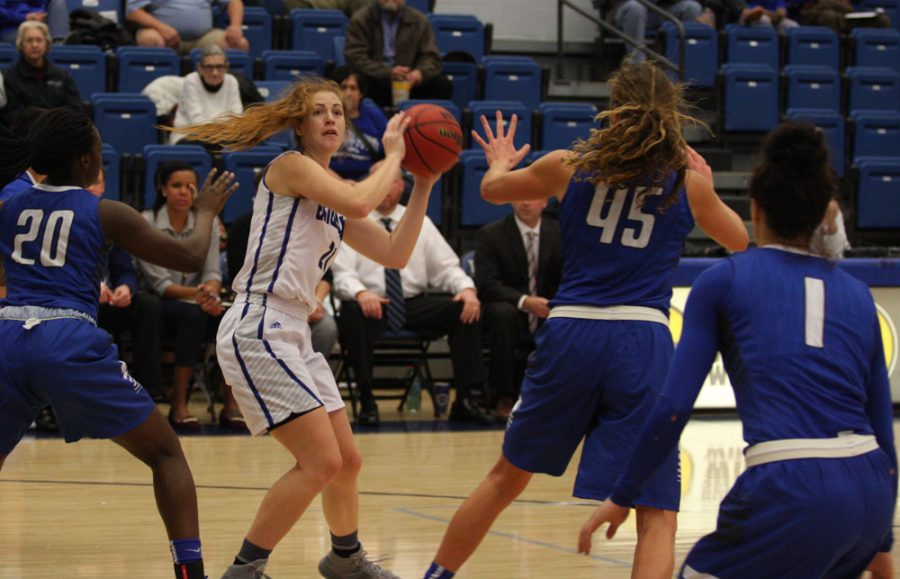 Sophomore Halle Stull looks for a teammate to pass the ball to on Monday against Indiana State at Lantz Arena.

The Eastern women’s basketball team was given a spoonful of their own medicine, shooting efficiency, in a 88-61 loss to Indiana State Monday Night at Lantz Arena.

Eastern led the Ohio Valley Conference in field goal percentage prior to the game had the script flipped on them by Indiana State who shot 60 percent from the field, including an impressive 11-19 from the three-point line.

The Panthers were unable to match the lights-out shooting of Indiana State, Eastern shot just 40 percent from the field, and just 3-17 from beyond the arc.

“It always plays a big factor, I mean that’s 33 points and we had nine,” Eastern coach Debbie Black said of the three-point shooting. “We were in a two-three (zone), I got out of that, and we went to the man, and they were still shooting three’s in our face.”

“We were just a step slow on everything today and I don’t know if I have any answers for it, they (the players) don’t have the answers for it,” Black said.”We tried zone, we tried full-court pressure, to their credit they came out firing.”

Getting beat off the dribble was one the largest factors that led to Indiana State getting so many open three-point looks according to Black.

The three-point damage from Indiana State came from all over the roster, the Sycamores had six different players make a three in the game.

Sycamore forward Taia Ashley was the one that hurt Eastern the most with her efficiency, she shot 8-10 from the field and 3-5 from three-point range, in route to a game-high 19 points.