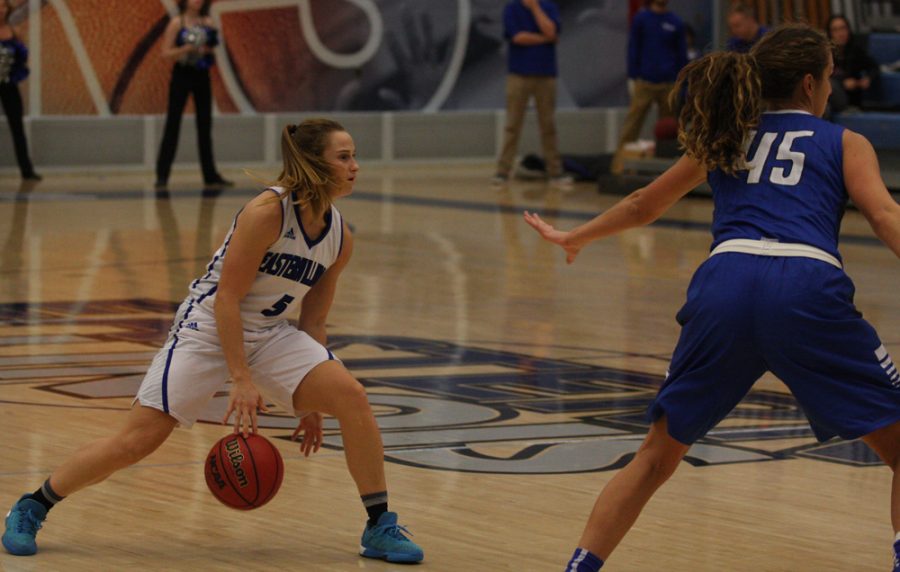 Junior Grace Lennox dribbles the ball while she scans the floor for a open teammate Monday against Indiana State at Lantz Arena. Lennox finished with 16 points in the 88-61 loss.

The Indiana State Sycamores came out shooting 6 for 8 from 3-point range in the first quarter and never looked back with an 88-61 over the Eastern women’s basketball team.

The Sycamores finished the game shooting 57.9 percent from 3-point range and shot 60.3 percent from the field. Indiana State made the Panthers pay with 14 second chance points and 36 points in the paint on Monday night.

The combination of Ashley Taia, Wendi Bibbins and Rhagen Smith gave Eastern problems all night. Taia led all scorers in the game with 19 points while adding three rebounds, two assists, one block and one steal. Bibbins and Smith each had 16 points. The primary rebounders for the Sycamores were Bibbins who had nine and Smith who had six rebounds.

After beating Cincinnati and getting blown out by Nebraska-Omaha, Eastern coach Debbie Black said they knew this team was going to come out hot.

“We knew they were going to come out firing and we just didn’t match their intensity,” Black said.

With the loss, Eastern falls to 4-3 on the season and Indiana State improves to 3-3. Junior guard Grace Lennox led the Panther scorers with 16 points and four assists. Senior forward Erica Brown was the only other Panther to reach double figures with 14 points and she led the team with six rebounds.

Eastern was out rebounded 33-26 in the game and 25-15 in defensive rebounding. Brown said the lack rebounding reflected the team’s effort.

“It is pretty black and white. There is nothing to go around about it. It is just straight up effort,” Brown said. “I feel like we weren’t doing the little things. I feel like were just a step behind and that carried over into rebounding.”

Eastern was outscored 29-19 in the first quarter in large part from two 3-pointers from Taia and nine points from Smith. The Panthers fought back in the second quarter and matched Indiana State with 14 points each trailing 43-33 at the half. Lennox had 11 of her 16 points in the first half.

Brown said the Sycamores were using physical play to their advantage in the rebounding.

“Every team you play is physical in the post, it is always a battle down there,” Brown said. “On the road there was a couple of bigger girls that I went up against but these girls were using more of their physicality as they were obviously putting in more effort.”

The defense is what failed the Panthers throughout the game.

“We have to get stops,” Black said. “We’re really good because I think this team is capable of scoring points. They weren’t really stopping us from doing anything, but they still had 43 points at halftime.”

Indiana State scored 24 points in the third quarter to jump out to a 67-47 lead going into the final quarter and Eastern was never able to get back into the game with the Sycamores keeping a 20 point cushion. The Panthers will be back on the road to take on Illinois State this Thursday.