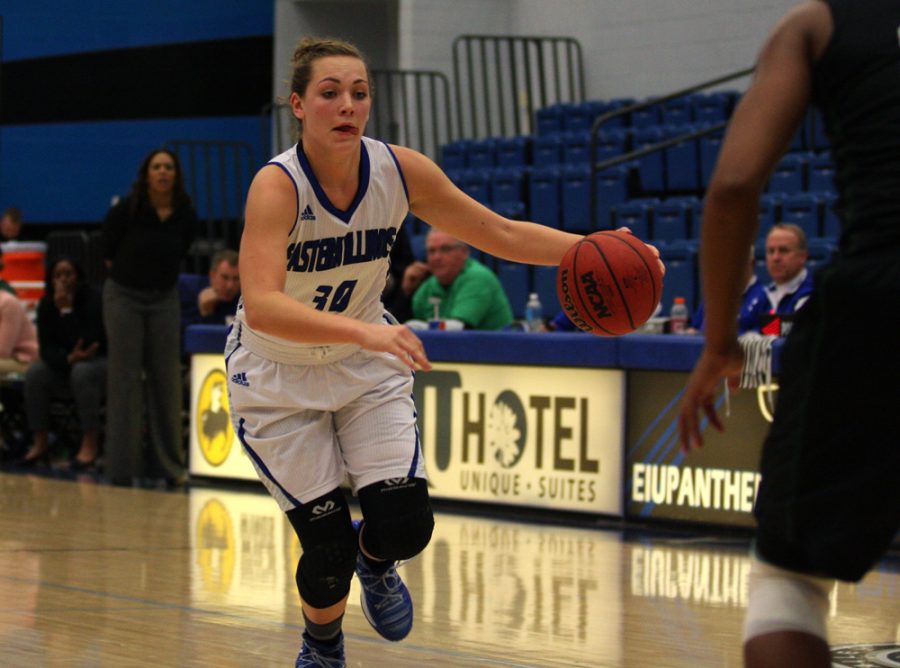 Freshman guard Allison Van Dyke drives into the lane for a layup in Eastern’s 71-61 loss to Wright State Thursday in Lantz Arena. Van Dyke led the Panthers with 15 points.

A big third quarter from the Wright State Raiders handed the Eastern women’s basketball team its first loss of the season on Thursday night.

After shooting 25 percent from the field in both the first and second quarters while making 1-10 3-pointers, Wright State caught fire in the third quarter.

The Raiders shot 61.5 percent to retake the lead 48-42 going into the fourth quarter.

A large reason Wright State was able to outscore Eastern 24-13 in the third quarter was because of Emily Vogelpohl’s three 3-pointers.

Vogelpohl finished with 17 points, 10 rebounds and 4 assists on Thursday night. Wright State coach Katrina Merriweather said she knew this would be a tough game for her team that is now 3-0 on the season.

“We knew it was going to be a tough game,” Merriweather said. “We were both 2-0 coming into this game. I’ve known coach (Debbie) Black for a long time. I know she is a really good coach and that her team was going to very prepared, and they were going to play really hard.”

Eastern led after the first two quarters 29-24 and played the Raiders very evenly on the stat sheet. But the outside shooting is what gave them the victory.

Eastern coach Debbie Black acknowledged how close the teams compared on the stat sheet after the game.

“This is as equal as it gets,” Black said. “We’ve got a talented team that just needs to slow down a little bit and figure out what we have going on.”

Junior Jalisha Smith was one of three players to score double-digits in the game. Smith finished with 10 points and 7 rebounds.

Wright State outrebounded the Panthers 37-33 in the game, but Smith said that was an area she thought they did well in.

“I think we still played as a team, and we’re playing well together,” Smith said. “We still rebounded well, and it just comes down to the little things that we need to pay attention to.”

Through three games, with many underclassmen including four freshmen on the team, Black said experience was a key in how they failed to adjust well to the Raiders’ shooting in the second half.

“Experience is always a key, and we have one senior,” Black said. “I think they kind of have to adjust on the fly, and I think we did that well in the first two games, but as we play better opponents it’s going to be harder and harder.”

Eastern will hit the road to take on Stetson this Saturday.