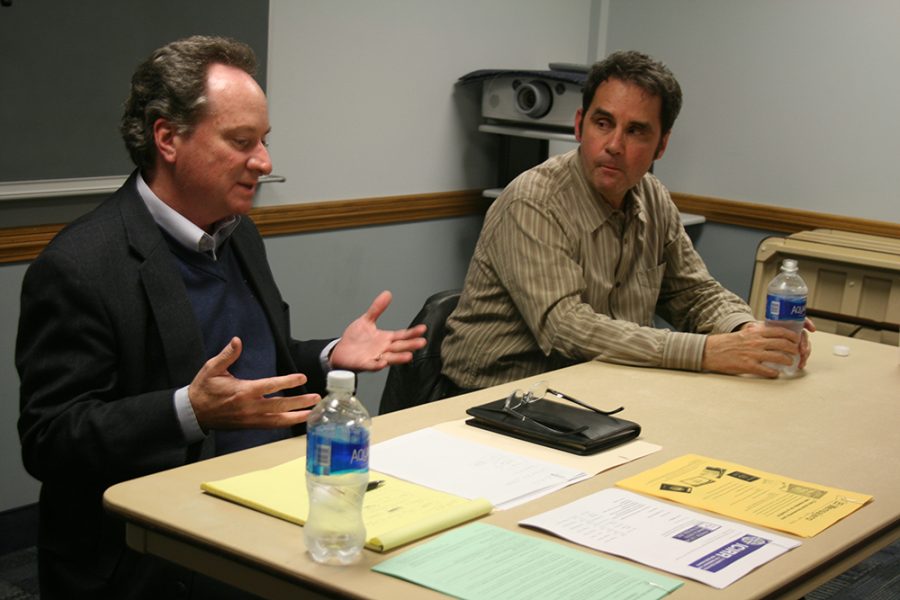 Tim Flavin, who works at the Mi Raza Community Center with hispanic/latina children and John Wilke, an attorney at law in Champaign who helps clients who are involved in immigration cases answser different questions surrounding immigration policies at The Immigration and Law Informational panel in the Shelbyville room Wednesday night.

Alpha Psi Lambda hosted an immigration and law informational to help alleviate concerns about the future immigrant students, faculty and community members may have regarding the recent election results.

Kenia Gonzalez, president of Alpha Psi Lambda, said the group wanted to have a healthy discussion about how they felt.

The informational was organized as a panel forum where two guests came to answer questions and discuss their experiences helping the immigrant population in surrounding counties.

“We wanted to help people know what’s going on,” Gonzalez said. “I worry when (my mother) brings her concerns to me because it makes me frustrated because I don’t know how to help her.”

Flavin said Mi Raza is an intense mentoring program, which aims to help the immigrant population in Arcola.

Latinos make up about 40 percent of the city’s population.

Mi Raza assists their clients with educational opportunities and navigating the social and legal system.

“There is just so much misinformation that’s out there and it’s hard to find reliable sources,” Flavin said.

However, he said President-elect Donald Trump seems to have softened his view on immigration.

Mi Raza started a program a few years ago that helps their clients get into college.

Four students they helped have actually enrolled this year, two of which are enrolled in Eastern.

Wilkie said a majority of his clients are also immigrants who he often helps deal with traffic or minor ordinance violations.

He offered legal advice regarding undocumented citizens and how they should handle legal situations.

“It’s important that people have accurate information about what’s going on,” he said.

Both took questions from a group of approximately 30 students, faculty and community members. Each had questions about the rights of undocumented immigrants and what kinds of resources are available to them.

Flavin provided the group with papers and flyers detailing the choices that immigrants have and the resources they can use to get information and help.

Flavin said Illinois is a state that is friendly to immigrants as opposed to others.

“Immigration is the second most complicated policy in law next to taxes,” he said. “It’s complicated and highly specialized.”

Both Flavin and Wilkie talked about the different immigration visas and what they are used for and what kind of benefits immigrants can have with them.

They also covered the Deferred Action for Childhood Arrivals Act and how it affects undocumented immigrants today and what would happen if the act were to be overturned in the future.

DACA was a policy enacted by the Obama administration that granted undocumented immigrants who came to America before the age of 16 certain benefits and rights to work in America, despite their legal status.

“There were really good questions,” Flavin said. “I was happy to be here.”