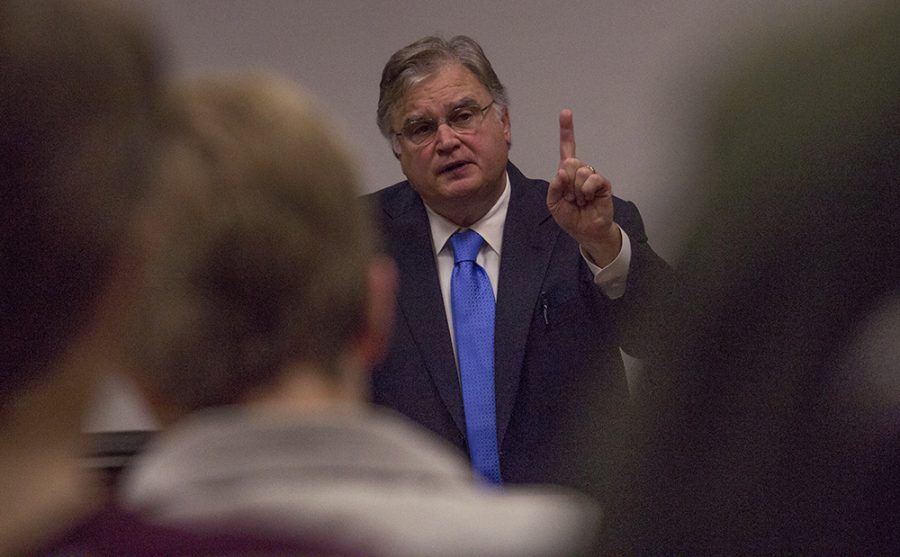 David Yepsen, the former executive director of the Paul Simon Public Policy Institute, talks about Trump’s 2016 election campaign in regards to the president-elect’s targeted audience, which he described as, “non-college whites” during the Edgar Speaker Series Monday in Lumpkin Auditorium.

Yepsen said he is hoping that out of Donald Trump’s victory, the state of Illinois will start doing something about income inequality issues, among the points he discussed regarding the election.

“Why do I say that? Donald Trump was elected with the votes of blue collared Americans, non-college whites,” Yepsen said. “Well the democrats were talking about that for years what was Bernie Sanders’ campaign aimed at a lot? Income inequality.”

Yepsen said both parties were speaking to this issue of income inequality and they tapped into the thing that is real.

Yepsen said Trump got these blue collared Americans to vote because they are mad.

Many of them voted for Barack Obama in 2008 and 2012, because they thought there would be change and since there was no change, they switched parties and they see Donald Trump as the game changer, Yepsen said.

“Donald Trump has got a year. He’s got his own party, he’s accountable now he’s got control of the House and Senate,” Yepsen said. “So we ought to be hopeful that whatever they do, they can come together on something and it will make life different.”

Yepsen addressed working on the infrastructure as another source of optimism he has, which will put people to work and creates an economic asset that both parties are in favor of.

Yepsen also said that the polls over the course of the campaign took a hit because people were reading too much into them and there was not enough attention focused on the margin of error and the pollsters did get things wrong.

One of the reasons why they got things wrong is a result of the “shy Trump voters,” Yepsen said.

Since it was not cool to vote for Trump, Yepsen said people were dishonest with the pollsters and thus hindered the polls, which he called the “Bradley Effect.”

As polling moves forward and tries to get away from using telephones to reach people, Yepsen said researchers find ways to create panels of voters and keep going back to them and to do massive amounts of online polling.

“You may have a better picture of what’s happening,” Yepsen said.

Yepsen also said he thinks there is going to be some changes in the presidential nominating process and “rural America.”

Yepsen said the issues faced by rural America were put on the table because they had such a large influence in the election.

And much like income inequality, Yepsen said the issues that rural America faces might be addressed by the new administration.

“It was rural votes that flipped some of these battleground states,” Yepsen said.

Regarding the election in Illinois, Yepsen said nothing has changed.

Bruce Rauner is still the governor, Michael Madigan is still the speaker of the House, Cullerton is president of the Senate floor and the Democrats still run the legislature and there is still no state budget after 18 months.

“What’s changed? Millions of dollars get spent and nothing changes. We still have no budget and there’s not much optimism. They can’t even agree on meetings,” Yepsen said.

Yepsen said Illinois does not know what will happen in the 2018 elections but predicts that it will be a battle of the “unpopular” since both Rauner and Madigan will be up for re-election.

Yepsen also said he would like to see what money can do, though it cannot buy love, it can buy seats.

Yepsen said the discussion of other issues is being clouded out by this, but right now he sees a recipe for more gridlock.

As for the state’s future and what needs to happen, Yepsen said though he does not know all the answers, the state needs to change the political culture so people will want to go into politics.

For instance, Yepsen said sleazy politicians who line their own pockets with money from campaigns or the government make Illinois a joke.

“Why do we have a culture in this state that says ‘government is not a public service it is a way to benefit yourself’ you don’t go into politics because you want to serve the public you go into it because you want to sweeten your own pension, get your brother in law a job…it’s called an individualistic political culture that comes primarily out of Chicago,” Yepsen said.

In most states that idea is long gone, except for the state of Illinois, Yepsen said.

“We are in fact the butt of jokes of late night T.V. So with that kind of atmosphere and that kind of culture that exists in certain parts of the state, now wonder people have no confidence in the state,” Yepsen said.

Yepsen said the culture discourages the “good people” from going into politics, especially among millennials and that has to change because if those said good people do not get into politics then that just leaves the state with the same corrupt politicians.

However, Yepsen said the only way to get out of the hole and actually have a budget in Illinois, is to cut spending and raise taxes.

Introduced by former Governor Jim Edgar, Yepsen was brought back to campus for the Edgar Speaker Series, established by Edgar.

Edgar said the purpose of the talks Edgar Speaker Series is to bring people to campus that have a good practical knowledge of politics, history and other relevant things in this age.

Edgar asked to bring back Yepsen because of his experience observing the state of Illinois.