Column: Women’s basketball team can be a real threat 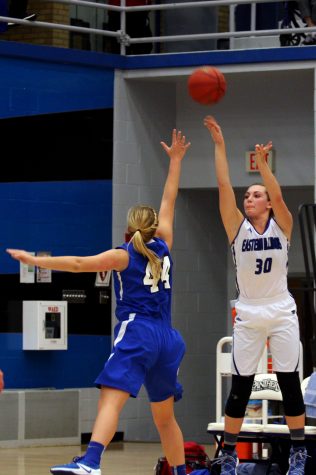 Through two games, the women’s basketball team is 2-0 and one win away from matching its win total from last season.

The first win was against Division III Millikin, but the Panthers looked in control with a young team, and they looked like they were having fun in the process.

Eastern was able to get everyone in the game in the 97-54 victory.

The next win came on the road against Evansville, and it was a significant win for the returning players on the team who failed to get a win on the road all of last season.

It is a long season ahead for the Panthers, but it looks like they are well past the 3-25 team that they were a year ago.

Coach Debbie Black has not been afraid to play the four freshmen to begin the year, especially guard Allison Van Dyke, who has had two consecutive starts.

Van Dyke is averaging 13 points per game, which ranks second on the team behind junior Grace Lennox.

Van Dyke has been shooting the ball very well going 10-15 from the field and 2-4 from 3-point range in her first two collegiate games.

Lennox has been running the offense once again this year, and her huge fourth quarter against Evansville helped the Panthers seal the victory.

Lennox is averaging a team-high 14.5 points per game and also leads the team in steals with five and minutes played with 65.

Her aggressive offensive play has gotten her to the free-throw line the most on the team, and she is 8-11.

As of Tuesday, the Panthers had the best field-goal percentage in Division I (.584).

Senior Erica Brown has picked up right where she left off from last season, as her presence has been known whenever she has been on the court.

As long as Brown can stay healthy and out of foul trouble, she can easily make a difference in a win or loss for this team.

Sophomore Halle Stull and freshman Jennifer Nehls have done well contributing off of the bench and when Black wants to go with the bigger lineup.

Against a tougher opponent in Evansville, Eastern needed a big third quarter to get them back in the game and take the lead.

They outscored Evansville 21-9 after trailing 32-26 at halftime.

Black has done a good job making adjustments at half and telling certain players to take more shots.

Van Dyke had just one shot and zero points in the first half of Monday’s game and finished with eight shots and 13 points in the game.

There are still 11 games until they start the conference schedule, so there is plenty of time for the Panthers to get more experience playing together as a young team.

If they can keep turnovers to a minimum and continue to take good shots, then this team will be a major threat to the Ohio Valley Conference.