Women get first road victory in over a year 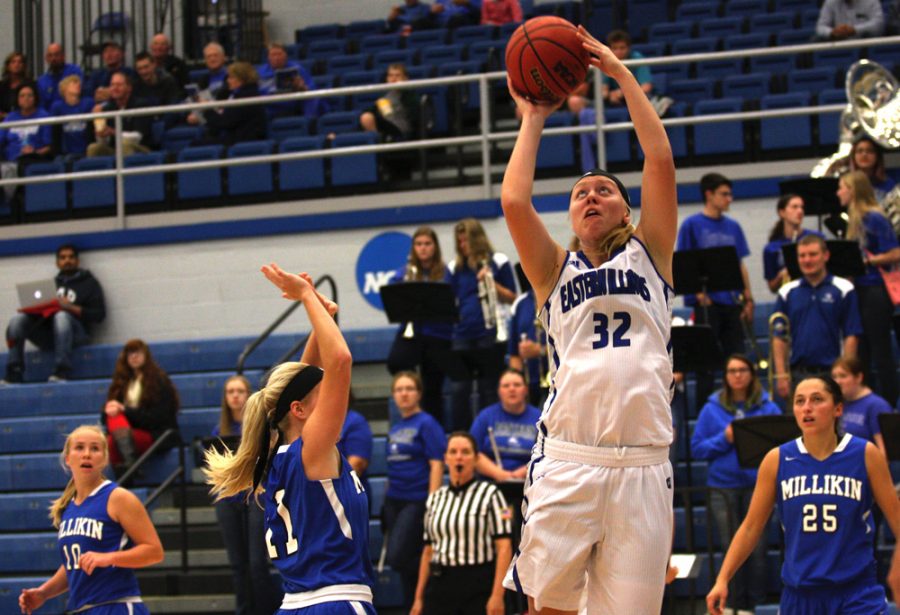 Freshman Jennifer Nehls goes up for a layup Friday against Millikin at Lantz Arena. Nehls scored 12 points in the season opening 97-54 win.

The Eastern women’s basketball team won its first road game since the 2014-15 season against Evansville on Monday night.

The Panthers won 73-63 and had four players score double-digits. Lennox led all scorers with 22, followed by Van Dyke (13), Stull (12) and Smith (10). Smith, Stull and freshman Jennifer Nehls each had seven rebounds in the game.

Evansville came out with a 10-4 lead before Eastern was able to go on a 6-0 run and tie the score up at 10. The teams traded baskets from there to tie at 12. Evansville went on to score five straight and the first came to an end with Halle Stull hitting a 3-pointer to make it 17-15 in favor of Evansville. Each team had four turnovers in the first quarter.

Stull came out hot for the Panthers scoring seven points in the first five minutes of the quarter to give Eastern a 24-21 run. The Panthers offense went cold from the 5:13 mark of the second quarter and did not score another field goal. Luckily for Eastern, Evansville was not taking full advantage of the misses and took a 30-24 lead before Lennox hit a pair of free throws.

Eastern immediately trimmed into the deficit at the start of the second half with a layup from Smith and a pair of free throws from Van Dyke to make it 32-30 Evansville. Van Dyke scored eight points in the third quarter alone and led the Panthers to a 10-0 run to give Eastern a 47-41 lead going into the final quarter. They were 9-for-11 in the final 4:21 of the third quarter with the help of four turnovers by Evansville during that run.

Lennox led Eastern with 13 points in the fourth quarter to help them pull away late over Evansville. Evansville went on a 6-0 run early in the fourth to pull within three, but Brown ended the run with a layup at the 2:46 mark. Eastern would not look back as they went on to win its second game in a row.

For Lennox, Black said she wants her to take at least double-digit shot attempts in each game and she did not have that early on, which she made clear at the half. Van Dyke was also told to be more aggressive after just one shot attempt in the first half.

The women will be back at home this Thursday to take on Wright State.