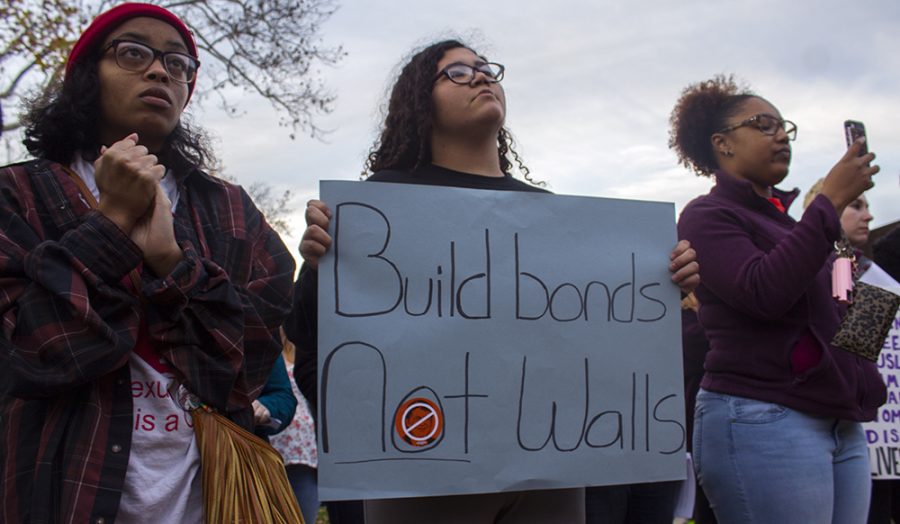 “I’ve been stressed, confused and shocked. We need to work together to make sure [Donald Trump] doesn't take away our rights” - Maya Lee, sophomore psychology major, as she holds a sign that reads, “Build bonds, Not Walls.” Lee picked up her sign after speaking at unity rally protesting the president elect, Donald Trump Friday.

Days after they were shocked by Republican nominee Donald Trump winning the presidential race, students and community members convened on the Doudna Steps to protest the now-President Elect at a Unity Rally.

Chants of “Dump Trump,” “No Trump, No KKK, No racist USA,” “When they go low we go high” and “Love Trumps Hate” resounded through the Library Quad.

Speakers came up on the steps to show support for the protestors and speak out against Trump.

In her speech, Meagan Ramey, a senior biological sciences major, said she cried twice after he was announced as the winner of the election.

Several other speakers said they were upset by the win, with one saying it was like being punched in the gut.

However, protestors encouraged each other during the rally to vote, remain politically active and spread love within marginalized communities.

Ramey said being at the rally reminded her of being at home surrounded by loved and warmth.

“It’s like being in bed and having that safe space. It’s us unifying and saying that we all believe he is not the right choice,” she said.

When she was speaking, Ramey said she hopes that the participants leave with hope.

“Be inspired. Don’t fall under the pressure of your emotions, but take that passion and change the world with it,” she said.

Because the rally was held on Veterans Day, there were some moments dedicated to them by speakers.

Alicia Henning, a sophomore special education major, shared sentiments about the day because she comes from a military family.

During her speech, she read a letter from 23 Gold Star families addressed to President-Elect Donald Trump,criticizing his attacks on the Khan family, who spoke about him at the Democratic National Convention.

“Regardless of how people feel of the military they make a huge sacrifice for families and we should respect them regardless of the campaign,” Henning said.

William Harrison, a sophomore sociology major, spoke about the ‘Black Lives Matter’ movement and how being an African-American male in American society can be discouraging.

“It’s sad I’m not as valued in this country but having this platform is comforting and empowering,” he said.

In his speech he addressed cultural appropriation and the deaths of African-American men by police officers.

“I want to see as much love and respect for black people as there is for black culture,” he said.

Along with speeches, several poems, including “America” by Allen Ginsberg, were read at the rally.

“When I first heard the poem it shook me. I think it’s powerful and it covers a lot of marginalized groups,” Doherty said.

When Doherty read the line “I want a Black woman for president,” the crowd yelled ‘Michelle Obama 2020” in response.

“It’s really important for me to show our culture,” she said. “It’s not OK to have a president who doesn’t accept our culture.”

Maldonado, who is half-Mexican and half Puerto Rican, said she is not happy with Trump as he does not respect people.

Gladys Valentin, a senior Spanish major and vice president of the Latin American Student Organization, said she participated in the rally because she wants to established unity on campus.

She said it personally breaks her heart to see people trying to kick her out of her own country.

“People think we are overacting but honestly, this is bringing us closer as a community,” Valentin said. “I think getting together and sharing our feelings will accomplish a lot emotionally.”

To Shane Kennedy, a graduate student in the Fine Arts program, it is scary to see that over half the country agrees with Trump.

“Growing up I was always taught different that what Donald Trump was representing,” he said. “The ways he’s talking is really disappointing and scary. I just think it makes us look bad as a country and a people.”

Kristin Ploskonka, a  Charleston resident and Eastern alumna, said she came to the rally to let people know there are people in the community who support diversity.

While Ploskonka is upset that America has elected a president with no political experience and no foreign experience, she said there is a bigger problem of people thinking they have the right to treat others with disrespect.

“I think there’s a lot of hate brewing. A lot of people are upset about the President-Elect,” Ploskonka said, holding a rainbow flag in her hand. “We need to focus on what we can do to make people feel safe.”