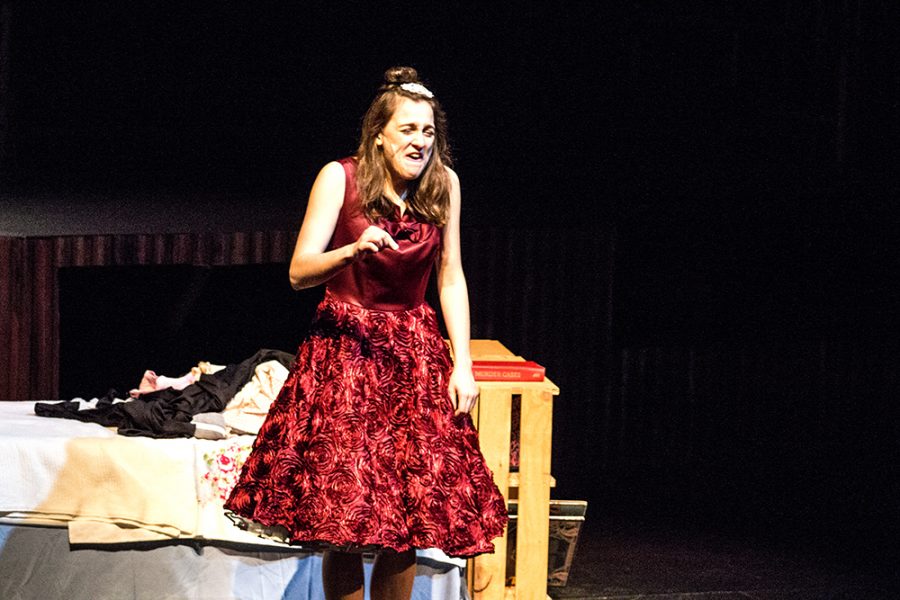 Rose is disgusted to find out the party that she attended with her date Eddie was an event composed by him and two of hs fellow marines, which involves each of them throwing down $50, competing to bring the ugliest date. The winner collects all of the money.

From the Vietnam War to prostitution and sexual assault, students will tackle tough subjects as part of the fall musical “Dogfight.”

Director Anne Thibault, an acting professor, said she loves the show because it is brand new.

“The whole storyline covers the effect of the male gaze on society. It’s a show about young people,” she said. “We have a deeply divided world right now, and this is what this show is about.”

The script is an adaptation of the 1991 Nancy Savoca film, “Dogfight” and it first debuted on Broadway in 2012.

The story is set in 1967 in San Francisco and is about Marine Eddie Birdlace, who returns from the war in Vietnam. He flashes back to a time in his life four years before his return home.

Birdlace, portrayed by Logan Schmidt, a junior music major, and his buddies from the Marines decide to participate in a “dogfight” on their last night before being deployed.

A “dogfight” is a party game his fellow Marines played where they would pool $50 together.

The Marine to bring the “ugliest” date to the party wins all the money.

“It’s been difficult but fun. (Birdlace) is a really interesting role because I am not that kind of guy in real life, but to really sell the role you have to ‘be’ that guy,” Schmidt said. “I watched a lot of real war footage, which messed me up for a couple days, but it helped me get an understanding of his story.”

“None of us normally act derogatory toward women and you have to constantly remind yourself that it’s just your character, and at the same time show that we are all humans with human drives,” Becker said.

In the story, Birdlace meets the main female character, Rose, and invites her to be his date for the “dogfight,” and that is when his story really begins.

Rose is played by musical performance major Christina Peter, who said playing a woman portrayed as “ugly” in the show is a challenge in itself because she has the responsibility of relaying an important message about personal insecurities to the audience.

“We have to keep reminding ourselves it’s a story that needs to be told,” Peter said. “These are real-life situations and it’s our responsibility to bring awareness.”

The show touches on what Thibault described as sensitive topics such as sexual assault and people’s views on women. Although those can be considered controversial topics, the show also has a bit of comedy intertwined with its intense plot.

Kerry Takash, a senior elementary education major, plays the part of Marcy, a toothless prostitute who serves as the comic relief.

“The show is very crude about women, and the (female characters) in the show are seen as objects,” Takash said. “Marcy is the comic relief with no filter.”

The show portrays the debauchery and sentiment toward women and war during that time period and acts as commentary for contemporary issues, which Thibault said was appropriate in light of the recent election results.

Thibault said to accurately tell the story as if it were truly taking place in the ‘60s, her and English professor Chris Wixson provided the actors with music, history and lingo from that era.

Thibault and Wixson also provided the actors portraying Marines with military training from a military adviser to practice rifle drills and other military details needed for the show.

“You don’t want to tell a story and disrespect the people of that time,” Thibault said. “It is really important to us that we tell the story accurately.”

Thursday night marked the opening night for the show as they wrapped up dress rehearsals and tech week.

Angelica Cataldo can be reached at 581-2812 or [email protected]iu.edu.