Men’s soccer team playing with season on the line 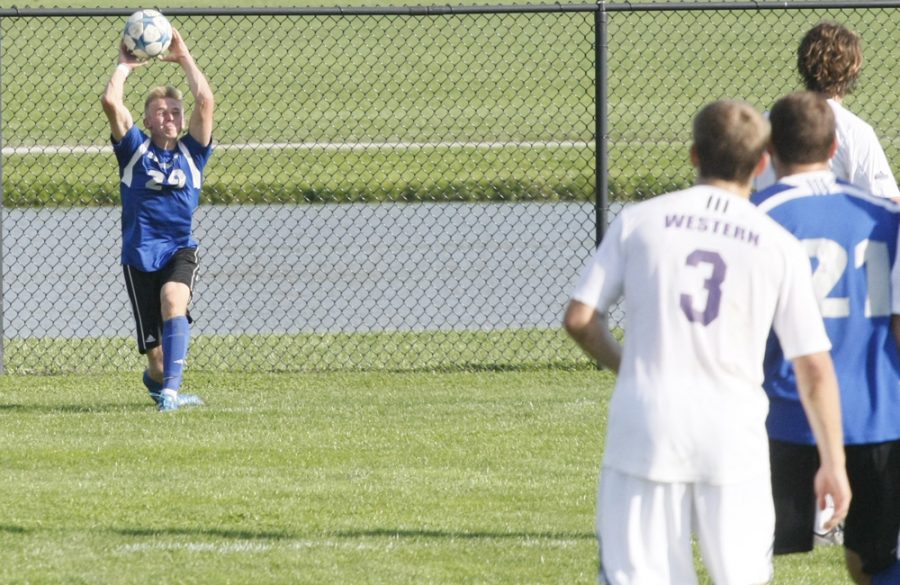 JuniorTyler Enright throws the ball in during a match against Western on Saturday, Oct. 29. The Panthers will face off against Omaha in the opening round of the Summit League Tournament today at 2 p.m.

It is win or go home for the men’s soccer team, as they take on the Omaha Mavericks in the first round of the Summit League Tournament this afternoon.

The Panthers are seeking its first postseason victory in program history and will be playing in the postseason for the first time since 2008. No current members of the program were apart of the 2008 team.

Eastern will be displaying a youth movement in Denver today with a variety of freshmen and transfers on the team. This team showed that youth was not a big factor to them as they were able to string along three straight wins at the end of the season to earn a berth in the tournament.

Freshman Alex Castaneda leads the team in goals (3), total shots (16) and shots on goal (10). It may be time to look at the upperclassmen on the team as the postseason approaches.

Carillo had two shots in the loss to Omaha earlier this season including one that was on goal.

Wegmann also recorded a shot in the game coming off the bench for the Panthers.

Pieper and Oliver have also provided spark for Eastern coming off the bench this season, and the Panthers may need that if they find themselves down early.

Medawattage has been a backbone for the Eastern defense ever since coming back from an injury earlier this season that caused him to miss some time. He played in 13 of the 17 regular season matches and recorded two shots with one on goal.

The loss against Omaha on Oct. 8 was where the turnaround started for Eastern.

After the 2-0 loss to Omaha that extended their losing streak to seven games, the Panthers went on to win three games with the help of three shutouts from junior goalkeeper Mike Novotny.

They ended the season with two losses including a hard fought loss in the final minutes to IUPUI to end the season.

The Panthers will be dealt the tough tasks of containing Fazio Alihodzic and Emmaniel Hamzat, the leading scorers for Omaha

Alihodzic led the team in goals (8), assists (6) and points (22) this season, but Hamzat was right behind him with six goals and 14 points. The two scored goals in the 2-0 victory over Eastern this season.

The Mavericks were helped out by goalkeeper Joseph Ghitis’ four saves in the match on his way to recording the shutout.

Ghitis leads the Summit League in save percentage with a .778 and is among leaders in saves (56), goals against (16) and goals-against average (1.01).

Eastern will take on No. 1 seed Omaha at 2 p.m. and the match will be streamed live on the Summit League Broadcast.

The match will be streamed for free.