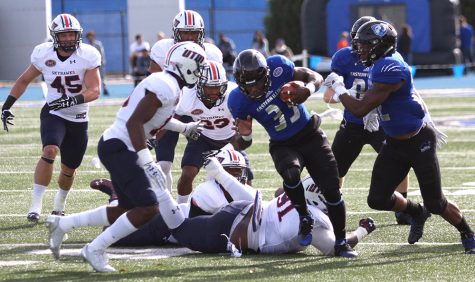 Bryan Bund Redshirt junior running back Chris Anderson tries to break away from the pack of Tennessee-Martin defenders during the Panthers’ 33-17 loss Saturday.

Bye weeks in football are usually much needed, and they are always a good time for a team to rest up for the remainder of the season.

But for the Eastern football team, it could not come at a worse time.

The Panthers suffered one of their toughest losses of the season this past weekend, but the worst part about it is having to sit on it through the bye.

There is no chance for a quick turnaround, as all they can do is get some extra time to prepare for the final game of the season.

Eastern’s playoff hopes disappeared after the 33-17 loss to Tennessee-Martin, so all that is left is to send the seniors out with a win.

While the bye week is not coming at the best time for the Panthers, it could also be a positive.

The root of Eastern’s struggles have come on defense and with the health of the quarterback position.

The defense began the year with some solid performances, but it has slowly broken down as it has been left on the field too long in critical matchups.

Part of that is connected to the offensive struggles.

The offensive struggles come from starting quarterback Mitch Kimble’s inability to stay healthy throughout the season.

Both sides of the ball have had their issues, but this bye week gives the team as a whole a chance to recoup on all that.

It may not be ideal to sit out a week, but the Panthers should embrace this time instead.

Junior wide receiver Addison Bounds emphasized how much he wants to finish this season with a win as well as sending out the seniors with a winning record.

Well, that all begins with the preparation over the next two weeks.

The extra time off can be used for Kimble to regain his health and come back for one final start this season against Eastern Kentucky.

Kimble’s healthy play can result into a strong offensive performance that limits the time on field for Eastern’s defense.

Both factors could come as a positive result from the time off, and give a chance to send out the seniors with a 6-5 winning record.

The time off gives the team a chance to sort out its turnover problem as well as address little mistakes.

With several penalties being the downfall in last weekend’s loss, the Panthers can now try to regain that self-discipline.

It is not how the Panthers envisioned this season or time of year going, but all that is left to do is finish off strong despite the missed expectations.