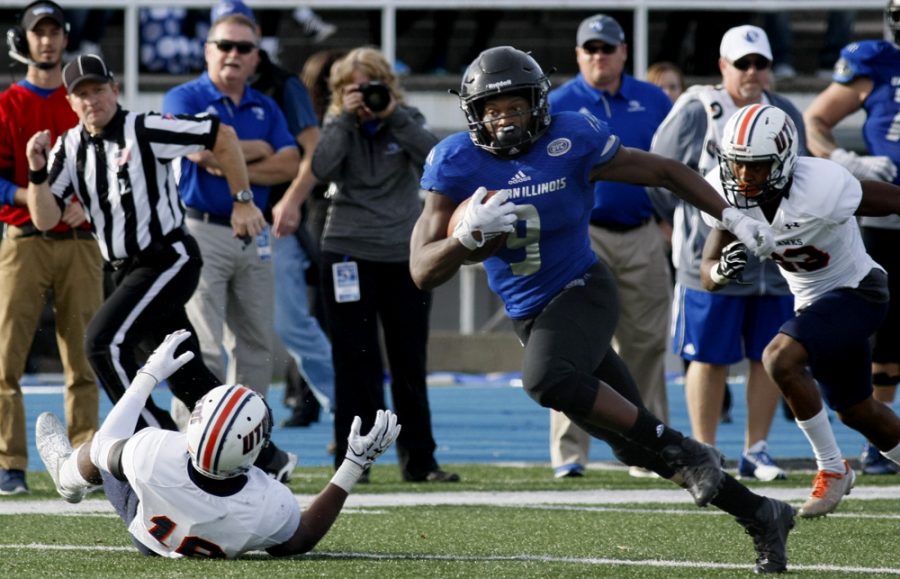 Redshirt senior Devin Church breaks away 27-yard touchdown in the fourth quarter Saturday against UT-Martin. Church carried the ball 13 times for 101 yards in the 17-33 OVC loss.

There will be two things on the Eastern football team’s mind in two weeks when the Panthers take on Eastern Kentucky to wrap up the season: What kind of team do they want to be? A team with a winning record, or a losing record? And how does Eastern want its seniors to remember their final game?

After Eastern’s loss Saturday, emotions ran high inside and outside the locker room as some players realized they had just played their final game at O’Brien Field. It was the last time they put on their home blue jerseys, and strapped on their black helmets.

And of course, knowing that in two weeks, the season will come to an end and a playoff berth is no longer in the picture.

Eastern knows that is just the reality it will have to deal with. But for its seniors, including the likes of team leaders running back Devin Church, linebacker Seth McDonald, defensive lineman Jarvis Williams and redshirt senior safety Pono Choy that will be the last time they play football as Panthers.

It can be expected that the seniors will give it their all to make sure they end their careers with a win, and for the younger players like redshirt junior wide receiver Addison Bounds, a proper sendoff for those guys is what they’re playing for.

He said the Panthers were obviously not able to do that in Saturday’s loss, but these next two weeks leading up to the game against Eastern Kentucky has to be for those seniors.

For some players, their sport is their life. To make it to play at the college level is tough, and that takes dedication nearly from the day that player is able to enroll in their sport, and for most, an NFL, MLB, NBA etc. career is not guaranteed.

Eastern may have not been able to deliver itself or Panther fans a postseason berth, but that should not lessen what the team, especially the seniors did this season.

It is easy to sit and watch the game as a fan or someone covering the game to just look on and take in what is necessary to take in for the game. But for a player, it is going to be the most emotional thing they go through in their college careers.

The guys on this team spent all of spring of 2016 together, the fall before the season, and every day throughout the week gearing up for a three-hour game each Saturday. It’s not like the Panthers planned for or tried to miss the playoffs; sometimes things just do not go the way as hoped.

So for these next two weeks think about what this game is going to mean to the seniors and the younger players who feel the need to help send their “brothers” out as a winner.

And that is the respect this team deserves.