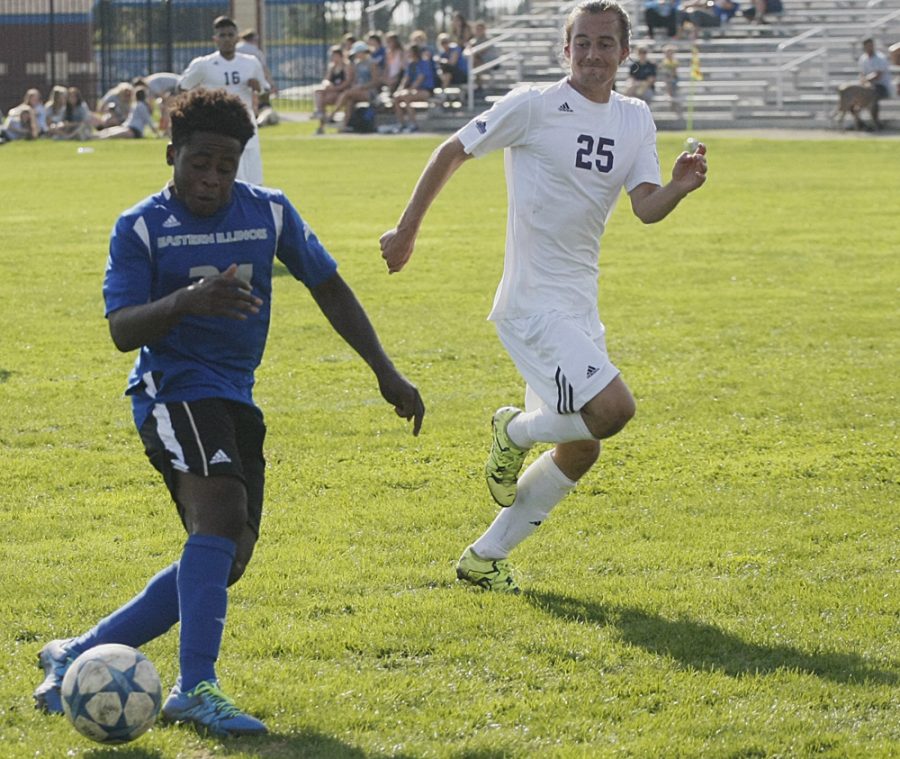 Sophomore Kris Luke battles attempts to get a shot off against Western Saturday, Oct. 29 at Lakeside Field. The Panthers finished the season 5-11-1 to earn a playoff trip.

The Eastern men’s soccer team came into the season with three wins in the previous season, one of which came in the conference. This year’s team featured many new faces and the Panthers were able to reach the conference tournament for the first time since 2008.

This year, the Panthers finished with a 5-11-1 record and a crucial 2-4 record against the Summit League. There was a stretch in the middle of the season where the Panthers were on a seven game losing streak and were shutout five times in that stretch. Down, but not out, the Panthers were able to go on a three game winning streak that featured wins over Fort Wayne and Western Illinois.

Junior goalkeeper Mike Novotny said it was belief that helped them turn it around.

“The belief that we could still be in the tournament,” he said. “We had three conference games after those seven games that could make a difference in the outcome of our season.”

Novotny and the defense played a big part in the wins over Western Illinois and Fort Wayne, Eastern held them both scoreless for 90 minutes. All three games in the win streak were shutouts and Novotny was named Summit League Defensive Player of the Week for consecutive weeks during the conference wins.

Novotny finished the season second in the conference in both saves (58) and save percentage (.778). He finished third among conference goalies with his goals-against average of 1.26.

Many newcomers on the roster also helped the Panthers this season. There were nine new faces that saw action this season. Freshmen Alex Castaneda, Jonathan Huerta, Marcus Menniti, Yann Nsoga, Andre Nappa and junior college transfer Tyler Enright were among players who had at least one point this year.

Novotny said as the new faces got comfortable playing at the Division I level, the team got better as a whole.

“As you get new faces in the squad it will take a little bit of time for them to et comfortable and acclimated to the Division I level,” he said. “As they began to get more comfortable we started playing better as a whole. Our defending definitely improved as the season went on as we were getting consecutive shutouts.”

Castaneda finished the year as the team’s point and goal leader with three goals and six points. Huerta, Menniti and Enright each had three points on the year with a goal and assist. Enright scored a game-winning goal early in the season against Green Bay. Nsoga recorded two assists on the year while Nappa contributed one.

Other young contributors were freshmen Anton Olsson, Alessandro Corti and Cole Harkrader. Olsson was one of five players on the team to play in each game along with Huerta, Menniti, Enright and sophomore Christian Sosnowski. Corti played in 11 games and Harkrader played in eight.

While the new faces have settled in, the whole team will be facing a new experience with the conference tournament. Eastern may be on a two-game losing streak heading into the postseason, but this will be a more improved team than Omaha saw on Oct. 8.