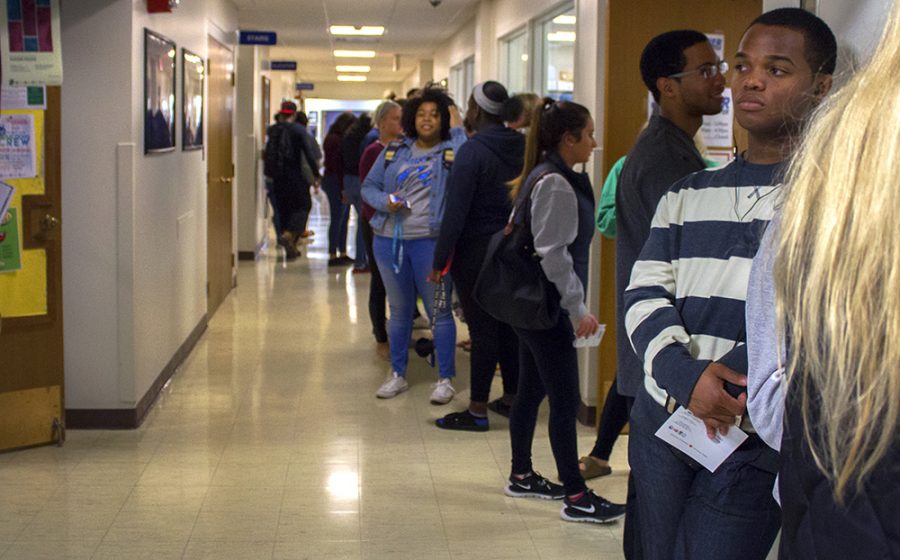 Students stand in line, waiting to register to vote in Coles County Monday in the hallway leading into the Bridge Lounge of the Martin Luther King Jr. University Union. Some students waited as long as two hours to register and vote in the same day.

With the general election merely hours away, the time period for early voting has come to an end. The line for the early voting, in the Bridge Lounge of the Martin Luther King Jr. University Union, was past the Student Activities Center for much of the afternoon and only got longer as the day progressed.

Coles County Clerk Sue Rennels has held her position for 10 years and said the turn out for early voting this election season has been good.

She said approximately 5,500 to 6,000 people came out to vote across the county between the three early voting locations, which include the Bridge Lounge, Mattoon City Hall and the Coles County Courthouse.

Early voting has been going on since Sep. 29 and has been happening on campus since Tuesday Nov.1.

Rennels said while registration has gone down recently she is seeing more voters than the last election.

She thinks the number of early voters has gone up because of the enthusiasm for both candidates and more people are realizing they can vote early.

Rennels said she thinks early voting is important because it helps people get it out of the way early and it is convenient.

“People might have commitments that take them out of town,” Rennels said.

She said voting early is also a good way of making sure a person’s voter information is correct, and if it is not then a person can fix it.