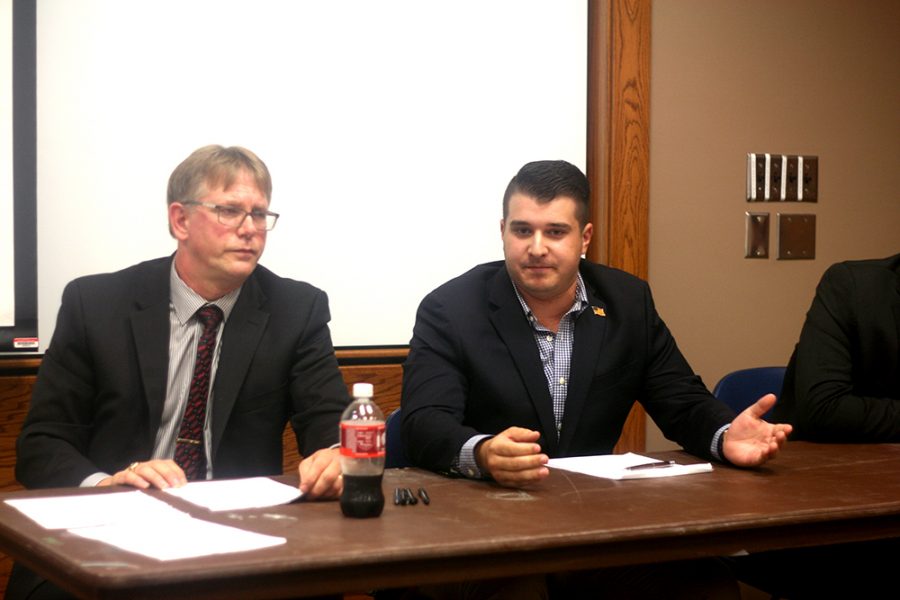 Jon Bell, a Public Administations major and Sam Cundari a political science major of the Eiu College Republicans target The Eiu College Democrats on areas such as The Democratic party’s tatics for gaining voting apeal.

When it came to gun control, Williams said the gun laws work and they are not the problem, the problem lies in the gun industry itself.

“These guns are being promoted and sold based off of fear,” Williams said.

Williams said the gun problem also has to do with the culture of the country. He said people do not trust each other anymore and are told the person across from them may want to kill them.

Decisions must be made off facts and not fear, Williams said.

Cundari agreed with the culture statement Williams made, but made their own point about gun shows. Cundari said the “gun show loophole” is a myth.

He said only a pair of people at the shows are actually selling firearms and a federal firearms license is needed. He said they want guns out of the hands of individuals who are unfit to own them, while still allowing people who are fit to have them, to get them.

On immigration, Arellano said the current policies are outdated.

People who have been living in the country for decades are still waiting for their green card and the idea that undocumented people are receiving welfare is a lie, Arellano said.

She said those who have come in and not broken the law deserve to stay in the country.

Cundari said the people who cross the border without any papers or who stay after their papers have expired are criminals.

He argued the United States has an obligation to look after their own citizens before they try to help anyone else.

He used the example of Saudi Arabia and how they handle their borders, as they either send back illegal immigrants or kill them.

When it came to whether a former felon deserves to vote, the Democrats say yes. They want people to vote, and see them not being able to as a form of voter suppression.

The Republicans said the three-strike rule, which gives people convicted of a violent crime three times an automatic life sentence, was made under the Clinton administration and that took away the felon’s right to vote.

When it came time for closing arguments, The Democrats said everything good that has happened to the country is due to their party’s work. They gave examples such as the 40-hour workweek, the killing of terrorist leader Osama Bin Laden and the Federal Deposit Insurance Corporation, which provides insurance to depositors in U.S. banks.

Abell said the strength of the nation relies on the individual.

“Washington, D.C. does not know how to run your lives better than you do,” Abell said.

Mark Grubb, a junior history education major, said he thought the Democrats won the debate overall. He said he thought they had a good point about needing stricter gun laws. However, he wishes both sides would have talked about the environment.

“It is the most important issue of our time,” Grubb said.

Student Abdullah Wail said he thought the debate was a tie between the two sides and it was informative overall.

He said he liked how the Democrats wanted fewer restrictions on immigration. He said the Republicans went off topic at times, going on tangents, but he liked how they were pro-gun and cited the Second Amendment as their reasoning.

Wail said he is not going to vote because he is from Saudi Arabia and was intrigued when his country was brought up during the debate.

He said they accepted more than 700,000 refugees and helped fund refugee camps in other countries.

“They built a city north of Jordan,” Wail said.