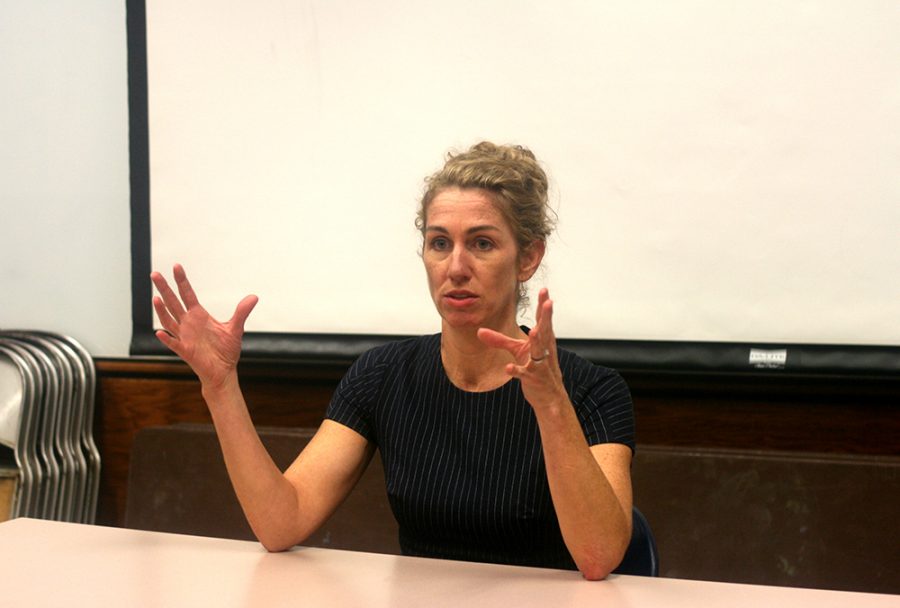 Heidi Stevens, former Editor in Chief for The Daily EasternNews and coulumnist fof The Chicago Tribune discusses her personal and proffesional life, and emphasises the importance of writing what you want.

Heidi Stevens, a columnist for the Chicago Tribune’s mission is to make readers feel less alone with her columns.

This is why when a member of the audience at a previous speaking engagement told her that her columns made them feel this way, she became emotional, happy that she was able to impact her readers.

Stevens, an alumna of Eastern who graduated in 1996, came back to her alma mater to speak about the humanities Wednesday night. Stevens was the editor–in-chief of the Daily Eastern News her senior year, and said her career “all started here at Eastern.”

After seeing a column written for the Chicago Tribune by Stevens titled “At Eastern Illinois University, my alma mater, a heartbreaking budget mess,” English professor Robert Martinez wrote Stevens inviting her to speak.

Stevens’ column, called ‘Balancing Act’ focuses on work-life balance and relationships. In these columns, Stevens said she writes about what she sees as important and will not write for an agenda that she does not understand.

At the lecture, Stevens also talked about the humanities, and said she loved the philosophy and humanity courses that she took at Eastern, and that sociology blew her mind.

“People forget that English and history and all these other humanities fields are the ones that develop really good critical thinking and reading skills,” Martinez said.

She said it helped her expand her horizons by learning information such as why people act the way they do and what motivates their actions.

“Good writing will save you in a million ways. If you are good at communicating it will take you a million places,” Stevens said, discussing how the humanities helped develop her career.

During an interview after the event, she said the most important piece of advice for journalism majors and aspiring journalists, is to “definitely get involved with the school newspaper, get as many bylines as (they) can and cover as many different topics as (they) can.”

She said the defining factor in her decision to be a journalist was getting her first column in college.

Martinez said there are tons of articles that say medical schools are actively recruiting those who studied the humanities.

“They are realizing that the communication skills they have are super valuable to how they are trying to rethink medicine and doctor patient relationships,” Martinez said.

Martinez and Stevens both said it is important for students to take different classes because they can never know when they will need to call upon those skills.

“No one else can do my job because it’s my voice and my opinion,” Stevens said.

Elizabeth Stephens can be reached at 581-2812 or [email protected]