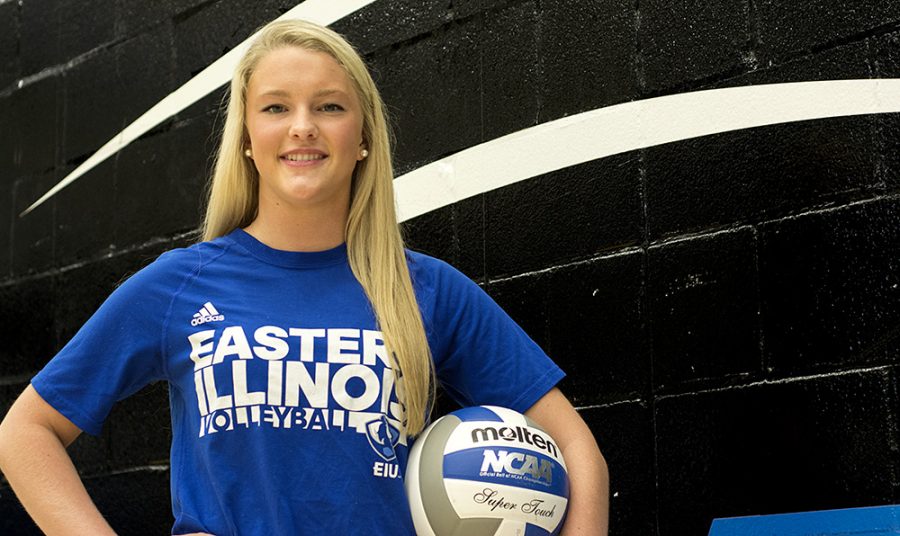 Freshman defensive specialist/libero Lindsey Powers leads the Panthers with 326 digs, averaging 3.33 per set. The first-year Panther has embraced her role as one of the younger leaders on the Eastern volleyball team.

It can be agreed upon that balancing life out as a freshman in college is not only intimidating, but also utterly stressful.

Between the pressure of doing well in classes, keeping up with your social life and maintaining good mental and physical health, it is a lot to handle for someone making the jump from high school.

But that is taken to another level as a student-athlete, and for freshman Lindsey Powers, that role has been elevated even more in her first year as a member of the Eastern volleyball team.

Powers may be just a freshman, but when she is on the volleyball court, all of that seems to go away, and her numbers this season prove that.

The first-year defensive specialist has embraced her role as one of the younger leaders of her group, and she has taken it to the court to improve in what has been a rebuilding season for the young Panthers.

From the first day she arrived at Eastern, Powers was faced with a task that not many freshmen earn the opportunity to take on.

Eastern coach Sam Wolinski told Powers she would be the Panthers’ new libero; arguably one of the most important positions for a volleyball team.

That would be a special opportunity for an athlete at any year, but Powers embraced the role early on and has found success along the way.

While she has been able to fill the position for Eastern, it was still a surprise to begin with for her to be in that spot.

“I was completely shocked; as a freshman you don’t really expect to get a lot of playing time,” Powers said. “I was really gracious to have that opportunity being so young and filling such a big role.”

There have been a few matches where others have stepped in at the position, such as junior Hayley Richardson, but Powers has filled the role for a majority of the season.

Her first collegiate match was an example of the skills on hand as Powers posted 17 digs against Stephen F. Austin.

That was no fluke though, and there has been similar numbers produced from her all season long.

Powers has notched double-digit digs in 18 of her 27 matches this season, as well as a total of 326 on the year.

That is no easy feat in volleyball, but better yet, Powers leads her team in digs with 41 more than junior Maria Brown who is second with 285.

Powers has embraced the role as a defensive specialist for her team, but according to her, that is not done alone.

All of the freshmen on the team have provided a certain role so far this season, but the upperclassmen have also been an important part of their development, according to Powers.

“Just as a freshman, all of the older girls have just taken us right under their wing,” Powers said. “As soon as we got here, there was no differentiation just because we were freshmen, and age really hasn’t played a role this year.”

All of the older girls have provided a boost in Powers’ performance, but one has inspired her the most in this first year.

Powers said redshirt freshman Gina Furlin has been a great mentor to look up to and ironically enough, Furlin is also in her first season.

After sitting out her freshman year because of an injury, Furlin has returned as a leader and mentor for Powers and others.

“She’s brought a lot of positivity and togetherness to the team and is an overall great leader that I look up to,” Powers said. “She just comes into practice every day working hard, and I admire her hard work and dedication to the program.”

That goes to show the youth and chemistry of the Panthers this season, as Furlin is enduring many of the same highs and lows as Powers in their first season playing.

While she credits her teammates for success, one thing that has been individually built is her defensive capability.

Powers’ defensive success began at a young age as she earned her high school team’s defensive award during her junior and senior seasons.

“Defense is a big thing for me, and it’s my favorite part of volleyball,” Powers said. “Defense has really helped the team out a lot, and I think everyone is improving their game with it.”

Although that defensive success has been in the making since she first began playing the sport, Powers also puts in time after hours to better herself.

Powers said she works with Wolinski before and after practice in numerous drills just to continue to improve in various parts of her game.

“It’s everything from taking time with me before and after practice, to texting me to show me what ways I can improve my game and become a better player,” Powers said.

As Powers credits Wolinski’s help to some of her success this season, her head coach knows how important the first-year Panther is to her team.

“She was willing to put in time and energy to get after it and make it hers, while helping solidify our passing and defense in the back row,” Wolinski said.

Powers said she and Wolinski spend time outside of practice to work on serve and receive drills, as well as just tossing balls so she can dive for them.

That extra practice has evolved her game defensively while continuing to emphasize the importance of improving with game speed.

“She had a solid skillset coming in, but it was important for us to get her comfortable with the speed of the college game and giving her the reps needed to improve,” Wolinski said.

With all the success in sports also comes struggle along the way, and for Powers that has been the importance of collegiate game speed.

“The change of game from high school to college is big considering I went to a smaller school,” Powers said. “It was a big wake-up call, but I love playing at this competitive level.”

The play at this competitive level has been something to enjoy for Powers, but unfortunately there has not been the amount of wins some expected coming in.

Despite the fact that this has been a rebuilding season for Eastern, Powers is still confident in the future of the program, as well as the current team chemistry.

“Our team chemistry has helped a lot, but I think it’s just important for us new girls to get used to the speed of the program and learning from mistakes,” Powers said. “Overall, just hard work and consistency is going to get us there.”

With a bright future in mind, Powers said the focus for now is to try to win the team’s final four matches of the season.

Regardless of the outcome, Powers has edged herself in as a key piece to the Panther puzzle for the coming years, and her performance this season has been a solid example of that.