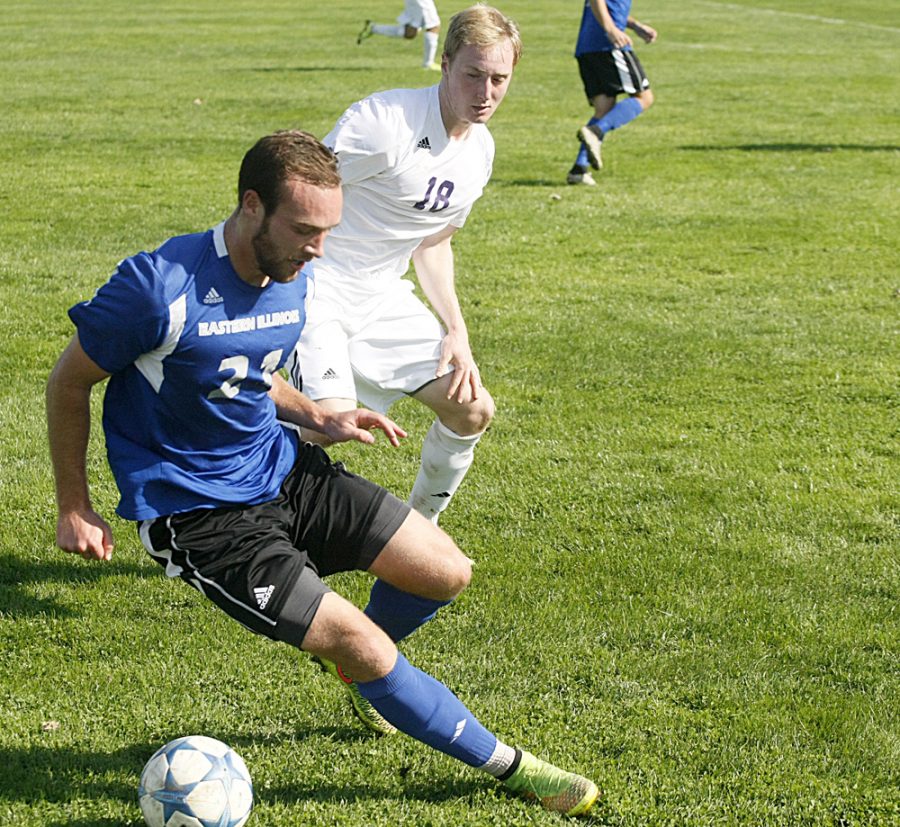 Senior Davis Wegmann fights for ball control with Western Illinois' defender Jamison Kozar Saturday at Lakeside Field. The Panthers defeated the Leathernecks 2-0 for their third win in a row.

Currently on a three-game winning streak, the Eastern men’s soccer team will try to keep the winning momentum going in its final non-conference matchup against the Cincinnati Bearcats Tuesday night. The match is a makeup for the Oct. 19 postponed match between the two.

The trip to Cincinnati will be the second-to-last game of the regular season for the Panthers, who are still in the race for the Summit League postseason. This game will not interfere with those postseason implications.

Junior goalkeeper Mike Novotny earned his second straight Summit League Defensive Player of the Week award with his six-save shutout in the victory over Western Illinois Saturday. He now has 48 saves this season and a goals against average of 1.16. He sits at second in the Summit League with a save percentage of .750.

Freshman Alex Castaneda scored the game-winning goal last weekend against Western and now leads the team with three goals and six points on the season. Senior Davis Wegmann and sophomore Julian Montoya are tied with four points each. Wegmann has two goals, while Montoya has one goal and two assists. Eleven different players have scored a goal for the Panthers this season.

Eastern has a record of 5-9-1 overall and 2-3 in Summit League play leading up to the matchup against an 8-6-1 overall and 3-3 in American Athletic Conference play Cincinnati team. Five of the eight wins have come at home for the Bearcats this season. The Bearcats offense is led by Adam Wilson and Ryan Melink, but there are many other threats on the team.

Wilson has a team-high 18 points with 10 assists and four goals. Melink is right behind him with 13 points and leads the team with five goals, adding three assists. Wilson leads NCAA Division I in assists per match this season with 0.67 and is first in the conference with his 10 assists this year.

Cincinnati goalkeeper Pedro Diaz has 72 saves this year and an impressive seven shutouts. He has given up 18 goals in the 15 games he has played and has a goals against average of 1.17 and a save percentage of .800.

Tuesday night’s match will be the eighth meeting between Eastern and Cincinnati. Eastern holds the 4-3 series lead, but the Bearcats came a way with the victory in their last meeting in 2014 with a 1-0 overtime win.

Following Tuesday night’s game at Cincinnati, Eastern will travel to Summit League opponent IUPUI Saturday for the final game of the season.