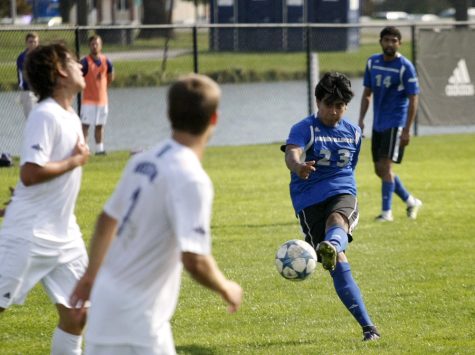 The Eastern men’s soccer team continued its success with a 2-0 win over Western on Saturday.

The Panthers are now on a three-game winning streak and improve to 5-9-1 on the season and 2-3 in conference play. Eastern kept its postseason hopes alive with the win and Western is still alive, but on a four-game losing streak. The Leathernecks fall to 6-9-1 overall and 2-3 in Summit League play. This was the third-straight shutout for junior goalkeeper Mike Novotny, and he now has four on the year.

“It has been a little bit of luck and some solid defending,” he said. “We have really been taking pride in our defending and blocking shots in the past couple games, and that has been a game changer for us.”

Eastern had four shots on goal in the game but took advantage of its opportunities, starting nine minutes in with freshman Alex Castaneda. Castaneda was assisted by sophomore Trevor Kerns for his team-leading third goal this season. Castaneda’s game-winner came from the right side of the box and was shot into the left side of the net. This was the second game in a row that Castaneda was responsible for the eventual game-winning goal.

Tim Hansen started at goalkeeper for Western, and he made two saves in the game, while giving up the two goals.

Later on in the first half, freshman Marcus Menniti scored his first career goal to put the Panthers up 2-0. Junior Tyler Enright set Menniti up with a cross into the penalty area, and Menniti tapped it in past the goalkeeper for the score. The Panthers’ two shots on goal in the first half resulted in goals, and they had two more shots on goal in the second half. Freshman Jonathan Huerta and senior Davis Wegmann each had a shot in the second half.

Novotny was busy in the first half making five of his six saves in the first 45 minutes. It was a tight defensive battle in the second half as each team recorded two shots. Armel Kouassi led the Leathernecks in shots and shots on goal with five shots and four shots on goal. Western finished with nine shots in the game.

Western’s two shots in the second half were missed because of ball control by the Panthers and fatigue, Novotny said.

“They were getting a little tired in the second half, and we found our groove and were possessing the ball very well,” Novotny said.

The Panthers will travel to Cincinnati on Tuesday to make up the postponed match from earlier this season. Then they will travel to IUPUI this Saturday for the last match of the regular season.