“Pumpkin’ with the Prez” a success 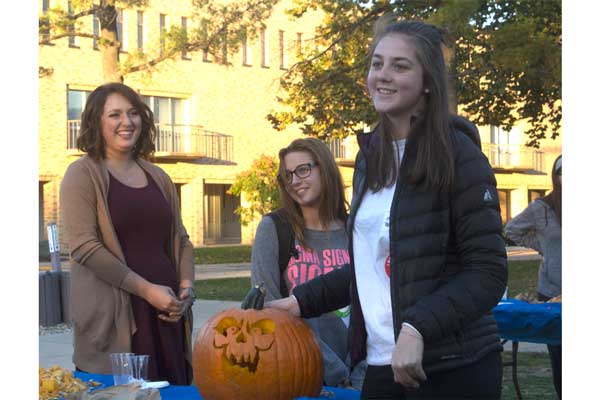 Luiza Sobell, freshman psychology and marketing major, explains her team’s pumkin design to Eastern president David Galssman and members of the crowd who helped Glassman pick her team’s pumkin as the winner of ‘Pumkin with the Pres,” hosted by the Eastern student senate. Sobell said she is from Brazil, so she had never carved a pumkin before Monday. “I’ve always liked the designs I’ve seen in movies and I wanted to do one,” Sobell said.

Though born in America, Soboll said she was raised in Brazil and always wanted to go to an American university.

Soboll said she wanted to make the transition into an American college easier for her so she moved to Illinois and lived with a host family her junior year of high school before moving into an apartment her senior year.

With her parents’ support, Soboll came to Eastern and said she hoped to be as involved as much as possible and do new things, like the Prowlin’ events.

The three teams competing had until 6 p.m. to finish their carved pumpkins and once they did President David Glassman, who helped judge, asked the teams why they think their pumpkin is “pumpkin perfect.”

There were four teams at the start but one team left early, and several members from Tri Sig decided to carve the abandoned pumpkin. The Tri Sig team came in first place.

The teams had until 6 p.m. to finish their carved pumpkins and once they did President David Glassman, who helped judge, asked the teams why they think their pumpkin is “pumpkin perfect.”

Glassman instructed other students in attendance that if they were not carving pumpkins then they could help judge.

Members from Alpha Sigma Tau, another team to compete, carved their Greek letters as well as an owl in their pumpkin and said teamwork was their strategy.

“Teamwork makes the dream work and the dream is to win,” Laura Rolfes, a sophomore psychology major and member said.

Glassman said he has never seen more people carving a single pumpkin before.

Shannon Reid, a sophomore early childhood education major and member of Alpha Sigma Tau, said she loved that Glassman was able to come out but was too scared to say hi because he is sort of a campus celebrity.

Though the team came in second place, members said they still had fun.

When telling the judges why her team’s pumpkin should win, Soboll said she poured her heart into carving the pumpkin.

Describing the weather Monday as a typical Brazilian winter, Soboll said she was freezing but enjoyed everything.

“I love it (being at Eastern), everyone is so nice and loving,” Soboll said.

The third team to compete was Alpha Gamma Delta, who came in third place.