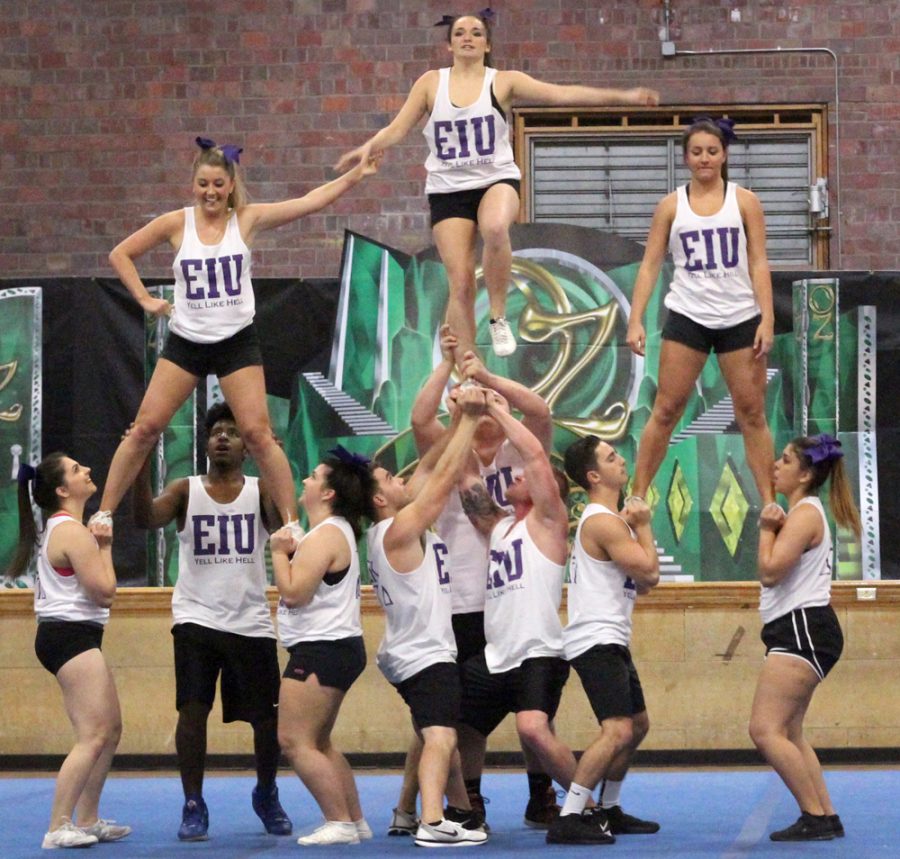 Members of Sigma Kappa sorority and Delta Tau Delta fraternity perform their cheer for the crowd at the "OZ-SOME" Yell Like Hell pep rally in McAfee gym Friday night.

Both Greek and registered student organizations showed that there is “No Place Like EIU” at this year’s Yell Like Hell pep rally.

Teams cheered and danced using their own routines with their groups to win.

In first place for the Greek Division were Alpha Phi and Sigma Chi.

While Alpha Phi’s group was led by three captains, Gianna Coco, a senior psychology major, said competing in Yell Like Hell is a team effort.

“We make the routine ourselves, and see how they feel,” Coco said.

Coco said participating in the pep rally gave the women a chance to bond.

It gave the older members a chance to get closer, Captain Shelby Reed, a junior nursing major said, and allowed them to meet new sorority members as well.

The weeks leading up to Homecoming were busy for the sorority, with Coco saying preparing for Yell Like Hell was a roller coaster.

Coco, who works two jobs and is a full-time student, said it could be “hard to balance” everything she has to do.

However, all three women said all the work was worth it to be able to perform for Eastern. Captain Alison Baker, a junior psychology major, said though it was a stressful, the sorority being able to come together was great.

“It’s not only for the fraternity, sorority, it’s about EIU,” Baker said.

This is Coco’s fourth and last year participating in the rally. She said she is happy, though it is bittersweet.

“We ended with a bang,” Coco said.

Yell like Hell gave Riley Doran, a sophomore bio and pre/med major, the chance to get back into an old activity.

Cheering since she was eight, she stopped to focus on school. To prepare to compete with Sigma Kappa, however, she practiced with her sorority for up to two hours a day.

Doran said it was nice to se people on campus come out for Homecoming.

“I just want to have fun, I’m excited to see everyone else’s routine,” Doran said.

Many of the organizations that performed incorporated the “Wizard of Oz” Homecoming theme.

Banners featuring items such as the Yellow Brick road, pictures of Dorothy, and “There’s no place like EIU” were hung and people held up signs in support of their organization.

During their act, the African Student Association having one woman run out and click her heels as the line “There’s no Place like Home” played in the gym.

Later, Rhythm and Xtacy had one of their members come out on the floor with a wand, reminiscent of the witches in the movie.

Other groups cheered before dancing to popular songs and recording that incorporated lines from “The Wizard of Oz” in them.

One of the judges, Brian Allen, a sixth grade math teacher from Peoria, said the judges looked at a group’s creativity, crowd appeal and the difficulty of stunts.

Involved in cheerleading for 20 years, this was his eighth time judging an Eastern competition.

“I love coming back to my alma mater,” Allen said.

While some groups stuck out more than others, Allen said overall, they did a great job.

The host for the night was Admissions Counselor Omar Solomon.

“I believe something’s going to happen,” Solomon said, as he led the crowd in cheering, “I believe that we will win” in anticipation for the next day’s football game.