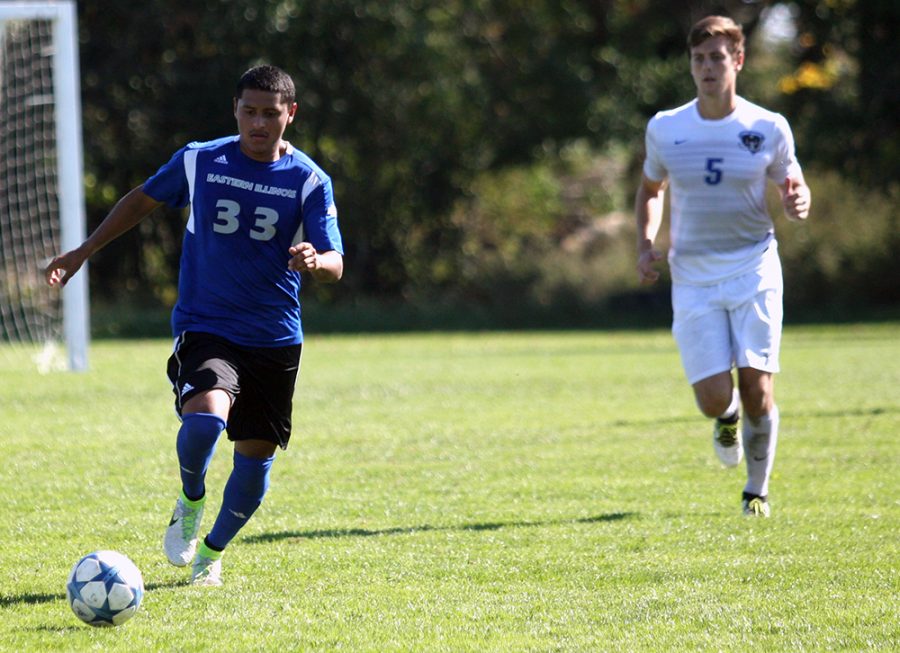 Eastern freshman Alex Castaneda sent the Panther bench into a frenzy when he made what would be the game deciding goal with 14 minutes to play in the second half of Eastern’s 1-0 win over Indiana University-Purdue Fort Wayne Sunday.

The goal by Castaneda was a rocket ball from outside the box that found the top left corner of the net, just passed the hands of a diving IPFW goalkeeper.

“It was good, worked really hard through the game last 15 minutes. It was good to get a goal,” Castaneda said. “We just kept working and had to defend for the rest of the 15 minutes.

The biggest performance of the day for Eastern however, was the one that came in front of the net. Panther goalkeeper Mike Novotny had seven keys saves in his shutout of the IPFW offense, and had a stretch of four saves in 5 minutes in the second half.

“I made a couple of mistakes to make those saves but at the end we pulled through,” Novotny said. “My teammates saved me a couple on those rebounds, I wasn’t really holding a whole lot today so I thank them for that too.”

As is the case with most conference games, neither team was looking to give the other any easy shots; both Eastern and IPFW played very physical and aggressive games.

“It’s normal in conference play to have a game like that,” Eastern director of soccer Kiki Lara said. “In the first part of the game it kind of left us a little unsettled. I think our guys are still a young group and they have to understand in conference play we have to set the tone in the moment and I think after about 20 minutes we got into it.”

The physical play was no surprise to coaches, but for the young Eastern squad, it took a bit of adapting to early on in the game.

“Coaches I think expected it,” Lara said. “I think sometimes as players, as young as they are and maybe inexperienced, sometimes our group, freshman and sophomores, most of them, I think sometimes they don’t quite get that to the level that we get that. Eventually the game kind of teaches the guys how to handle that and they did it.”

IPFW outshot Eastern 13-7 overall, but the superb play of Novotny coupled with what Lara referred to as “grit” led to Eastern coming away with the win. For the Panthers they move to 4-9-1 (1-3 conference) on the season, IPFW falls to 7-8 (1-3 conference).