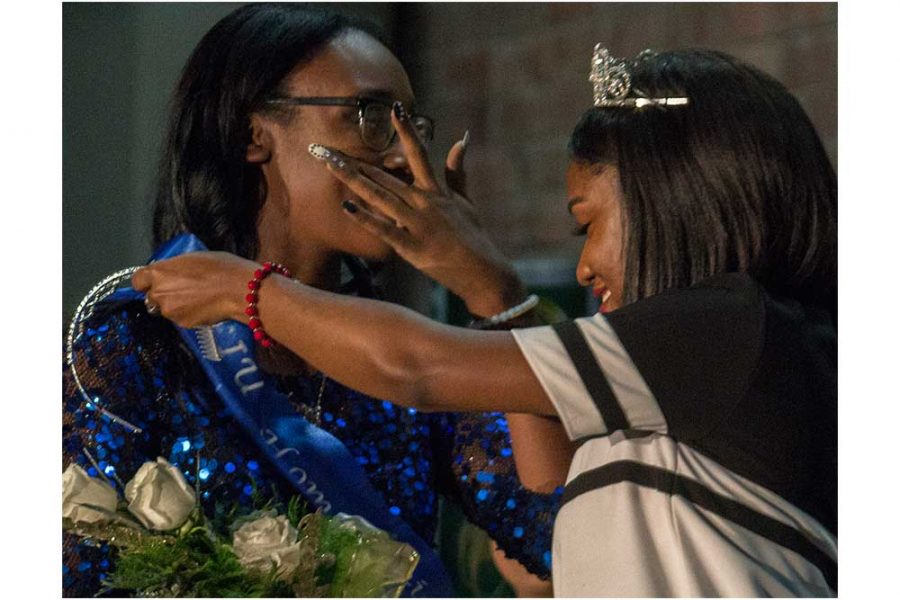 Khayla Kelley-Morton, a junior family and consumer sciences major, wipes tears from her eyes as she is crowned homecoming princess by last year’s princess Astoria Griggs-Burns, a senior health adminstration major, during the Homecoming Corination Cerimony Monday in McAfee Gym.

“I’m very happy that all my hard work paid off,” Amos said.

All the candidates have done their own campaigning. Amos said he handed out fliers and campaigned online for his candidacy.

“I (was) really excited,” Kelley-Morton said. “With everything that’s going on, it’s nice to be able to bring out some positivity.”

Kelley-Morton said that she was thankful for the support and positivity from everyone around her throughout her campaign.

The coronation was one of the first events to kick-off the 2016 homecoming week. It began with a moment of silence for the late Pi Kappa Alpha brother Tyler Behnke, and a roll call for all the student organizations.

Before the student court was chosen, the faculty homecoming court was announced as part of the Eastern Homecoming tradition. French instructor Ryan Schroth and Spanish professor Kristin Routt were crowned Faculty Homecoming King and Queen.

“It’s great, I’m happy to represent,” Schroth said. “I show the community at EIU and I am totally happy to be a part of it.”

Schroth has been teaching at Eastern for a year and is the advisor for Eastern’s French Club.

Routt is a faculty sponsor for Alpha Psi Lambda and is also involved with the Spanish Club and Latin American Student Organization.

“(Routt) has helped us tremendously. She shows us our potential and what EIU is all about,” Adam Sandoval, senior member of LASO and Alpha Psi Lambda said. “She really deserves it.”

Although not mentioned during roll call, Sandoval, along with many other students who are part of LASO and Alpha Psi Lambda, came out to support Routt for her coronation.

“(Routt) supports us 120 percent. As a Latino, it’s nice to have that much support for Latin culture,” Kenia Gonzalez, senior member of LASO and Alpha Psi Lambda said.

Routt said she was surprised by her win and was unaware of her candidacy until she received an email congratulating her on her nomination before the coronation.

“I was both proud and humbled that I was nominated by a group of my student (peers),” Routt said.

In addition to the crowing of the faculty and student court, emcees Hailey Tellier and Maria Sakellaris also announced the winners of the Lil’ Homecoming Prince and Princess Court.

The ceremony closed with a roaring applause from the audience while students from the represented fraternities and sororities of the winning court shouted their chapter’s chants.