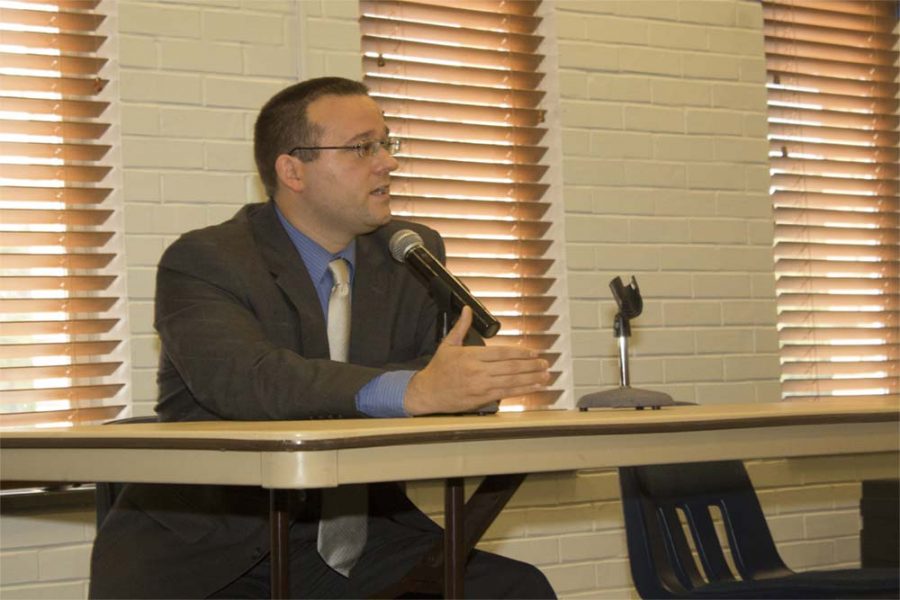 Dennis Malak, Democratic candidate for Illinois’ 110th represenative district, sits next to an empty chair and answers questions from community members during a forum Wednesday at the Martin Luther King Jr. University Union. Reggie Phillips, the incumbent representative, was not in attendance.

The candidate forum Wednesday in the Martin Luther King Jr. University Union allowed students, faculty, staff and community members to ask the candidates questions about their campaign and their plans if elected.

Bailey Young, history professor and member of University Professionals of Illinois, said Eastern’s chapter of UPI and the faculty forum committee sponsored the forum for everyone in the community to get a better understanding of who is running for representative for the 110th district and how the election will affect them.

“This is perhaps the most important election for us here and nationally,” Young said.

According to Todd Bruns, Faculty Senate’s faculty forum committee chair, incumbent representative Reggie Phillips was not able to attend his scheduled meeting at 4 p.m. as a result of an emergency meeting with his party’s leadership.

“I think it’s disappointing that Mr. Phillips couldn’t make it, but it was great that Mr. Malak was able to come early,” Bruns said.

Bruns said that the faculty forum committee and UPI will try to get another date scheduled for Phillips in the near future, but noted that it will be difficult as election day draws closer.

Approximately 35 were in attendance for the forum where Malak answered a wide range of questions from the audience.

Questions ranged from topics such as Malak’s outlined plan to increase a service tax, his opinion on term limits and distribution of money regarding the state’s budget, funding for Eastern, and his stance on the medicinal use of marijuana.

“I think (politicians) want to be an expert on all things, but they’ve got to listen to the people and keep that communication open,” Malak said during the forum. “I think what makes me different from other legislatures is that I keep a very open mind and listen.”

Malak said, in response to a question about his planned involvement in the legislature, he is planning to be part of the higher education and agricultural committees if elected.  He also said he wanted to make sure the people’s voices are heard.

“We don’t need name-calling or blaming,” Malak said. “We need action and we need it now.”

Austin Mejdrich, a political science major in attendance, was happy to hear about Malak’s plans for the campus funding and said Malak was clear on his stance and did not ignore the topics that were brought up.

“I thought Dennis did a really great job stating his stance,” Mejdrich said. “It’s refreshing to hear his actual plans.”

Kate Klipp, Malak’s campaign manager, was also in attendance and wished that both candidates could have been present for the forum, but praised Malak on his performance.

“I think Dennis did great. He’s endorsed by almost every faction of (Eastern),” Klipp said. “I think (Dennis) will be a real fighter for this institution.”

The forum concluded with a few closing words from Blitz and Bruns. Malak said that everyone in the audience asked great questions and hopes that everyone came away with the information they wanted.

“I’m not very good at speaking at people, but I want to make sure people know I’m accessible to everyone and that I’m here for them,” Malak said. “I think they like my honesty. Honesty is big. People are sick and tired of the way things are, and I am just as frustrated. That’s why I decided to run.”