CAT to perform Rocky Horror this weekend in Mattoon 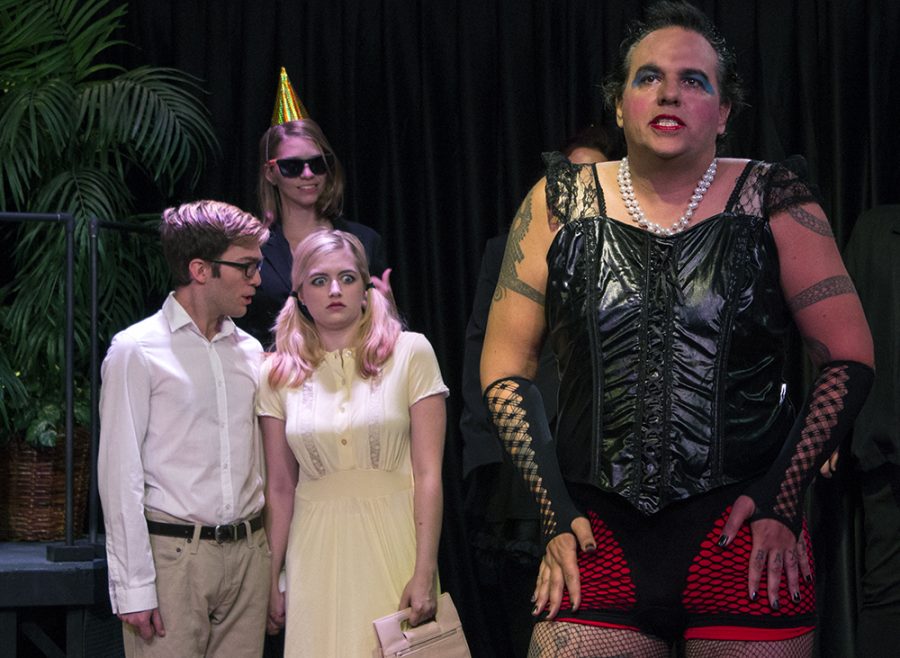 The Charleston Alley Theatre will be doing the time warp again in their third production of Richard O’Brien’s “The Rocky Horror Show.”

Director Marie Jozwiak held auditions back in August and now, with help from musical director Tony Cox, executive producer Duke Bagger and the rest of the cast and crew, is ready to take the show to opening night at 7:30 p.m. Friday at the Mattoon train station in downtown Mattoon.

“Everyone has been really awesome,” Jozwiak said. “They all bring excitement and energy to the table.”

Jozwiak is an Eastern alumna and has been with the CAT for over 10 years. She was the assistant director for the past two productions of “The Rocky Horror Show” and has also performed in multiple CAT productions.

Both Bagger and Cox are part of the live band that will be playing accompaniment for the performance. The musical band features Chris Aghaei on percussion, Duke Bagger and D.L Buller on strings, Tony Cox on piano, and Laura Severson on flute.

Banyai played Dr. Scott and Eddie in the CAT’s first two production of the show, and has been in over 20 other CAT productions.

“This show is my generation. I’ve been a fan from the beginning,” Banyai said. “I’m lucky to be in it.”

Drennan is also an Eastern alumna and opens the show as the usher singing “Science Fiction Double Feature.”

Wolf is performing in his first CAT production. He was familiar with the show but had only seen the movie version and not the live performance.

“It’s a fun role,” Wolf said. “I’ve been listening to the soundtrack for 30 years this year.”

This is Burn’s first CAT show and will be his first time back on stage in eight years.

Breneman is a junior theater major and is also performing her first CAT show. She said it was a last minute decision to audition and was surprised to be casted as Janet.

A majority of the cast will perform in undergarments on stage, and this was a new experience for portion of the cast.

“I was really nervous at first, but it’s a very open and comfortable show, and we all got used to it,” Breneman said.

Burns and Johnson have also not performed under these conditions before.

“Everyone has been really great, and it’s become second nature (to perform like that),” Burns said.

Johnson plays the part of Rocky, where he sports a speedo for the entirety of the show.

“It’s a very lively cast, and I’m completely OK with it,” Johnson said.

Johnson, Hilbert and Tague have performed with CAT before in the production of Shakespeare’s “Much Ado About Nothing.”

Hilbert has also helped choreograph the dancing in the show and has been involved with theater since she was 7 years old.

Hilbert and Tague talked about the extensive studying they did for their individual parts. This studying included watching and listening to multiple performances of the show to see how many different ways their characters were portrayed.

While Hilbert was familiar with the contents of the show, Tague was fairly new to it.  He said he auditioned with little knowledge of the characters, and after he was casted as Riff Raff, he then watched the movie in its entirety.

“I honestly didn’t know any of the music at all, so when I got my part, I listened to the songs over and over again until I did know them,” Tague said.

Jozwiak said the show was very hard to cast in that she wanted the characters to be played well, but also wanted the actors to make their character their own.

She and the rest of the cast and crew anticipate a large and lively audience, but Jozwiak also said the show contains mature content and gives a fair warning of any vulgarity or obscenity in the show.

During rehearsals, the two shout call-out commentary that is a tradition for any live performance of “The Rocky Horror Show.” These call-outs include sing-alongs, dance-alongs, and phrases or words shouted out when certain parts of the script are spoken on stage. Most often the call-outs contain vulgar words.

Bagger said that audience participation is highly encouraged, that includes the throwing of glitter or playing cards during certain scenes, participating in the call-out phrases, or dancing to “The Time Warp.”

Before the show, the live band will have a pre-show 30 minutes prior to curtain and will feature music like The Troggs’ “Wild Thing” and The Kinks’ “Lola.”

Tickets are $15 and group rates are available by reservation only by calling 217-345-2287. General admission tickets can be purchased through reservation or at the door one hour before curtain.