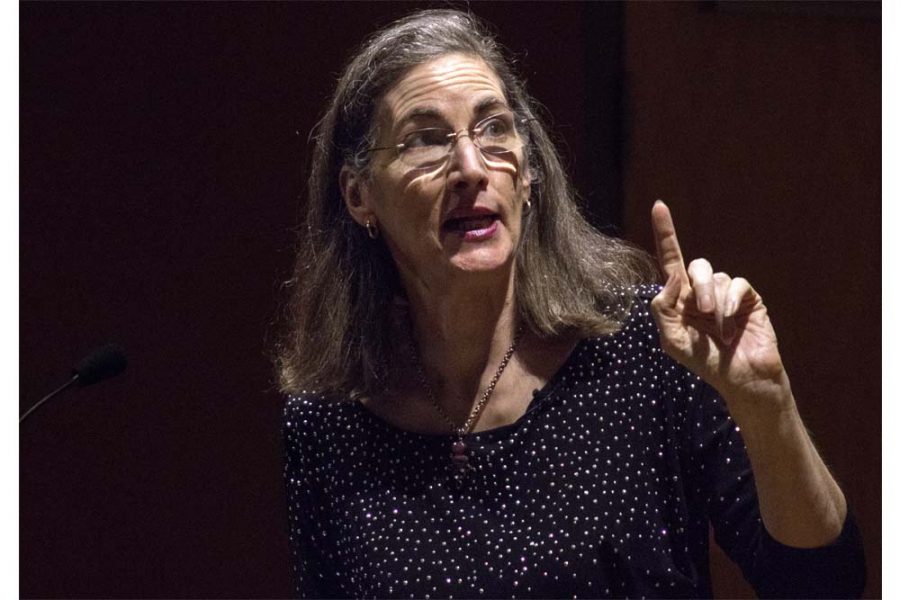 Gail Levin, a professor of art history and women’s studies at Baruch College, talks about a painting by Paul Gauguin, which influenced some of her own artwork, as part of a series of lectures dedicated to Camille Compo, a late founding member of the Eastern women’s studies program, Monday in the Lecture Hall of the Doudna Fine Arts Center.

“I really loved (Levin’s) personal connection with the art and artists,” Carol Stevens said, a retired professor of English and women’s studies. “It’s a record of a life lived in art and it would have suited Camille well.”

Camille Compo was a long-time advocate for the women’s studies department and worked in the office of budget and planning during her time at Eastern.

When the women’s studies department was approved as a minor in the early ‘80s, the work in the department motivated Compo to support the program even after her retirement.

She retired in 2001 as the administrative assistant to the vice president of external relations, and was heavily involved with the first Women’s History and Achievement month.

“(Compo) could sit down and talk to anyone and she had a fantastic skill in communicating and writing,” Judy Barford said, long-time friend of Compo. “She would have loved Gail’s lecture.”

Compo died in June 2015, and less than a year after, the women’s studies department dedicated a speaker series in memory of her name. As the first speaker, Levin presented “Telling Women Artists’ Lives,” a lecture focusing on the challenges women artists faced in history.

“It’s a great honor to find out that (Compo) shared some of the same enthusiasm for the same artists and art,” Levin said.

Jeannie Ludlow, associate professor of English and coordinator of women’s studies, gave a personal introduction to Levin’s lecture, honoring Compo and her support for Eastern and the arts.

“I’m 100 percent confident Camille is joyful wherever she is,” Ludlow said.

Ludlow said Levin was a “committed feminist” and praised Levin’s studies as something that would have greatly interested Compo.

Levin grew up in Atlanta and was the first person in her immediate family to earn a PhD.

She has written “Edward Hopper: An Intimate Biography,” “Becoming Judy Chicago: A Biography of the Artist” and “Lee Krasner: A Biography.”

In her work she talks about the female artists Jo Hopper, Judy Chicago and Lee Krasner, all of which were women whose work Levin believed needed to be brought to light.

“Things haven’t changed that much since I was young,” Levin said. “The stereotypes in public discourse and racism exemplified by people like Donald Trump and the gender bias is distressing.”

During her career, she curated at the Whitney Museum and became the first curator of the Edward Hopper collection. She studied his work and life extensively, and also studied Jo Hopper’s work.

She has also worked on a collage memoir, “On Not Becoming an Artist” where she made her own collage art about the people she met and the things she experienced in her field of study.

Levin’s lecture was the first of the series, and spoke at the Doudna Fine Arts Center Lecture hall followed by a reception in the Tarble Arts Center Main Gallery.

“I want to encourage young women to stand up and make it a better world,” Levin said.