Artist discusses issues in US through work 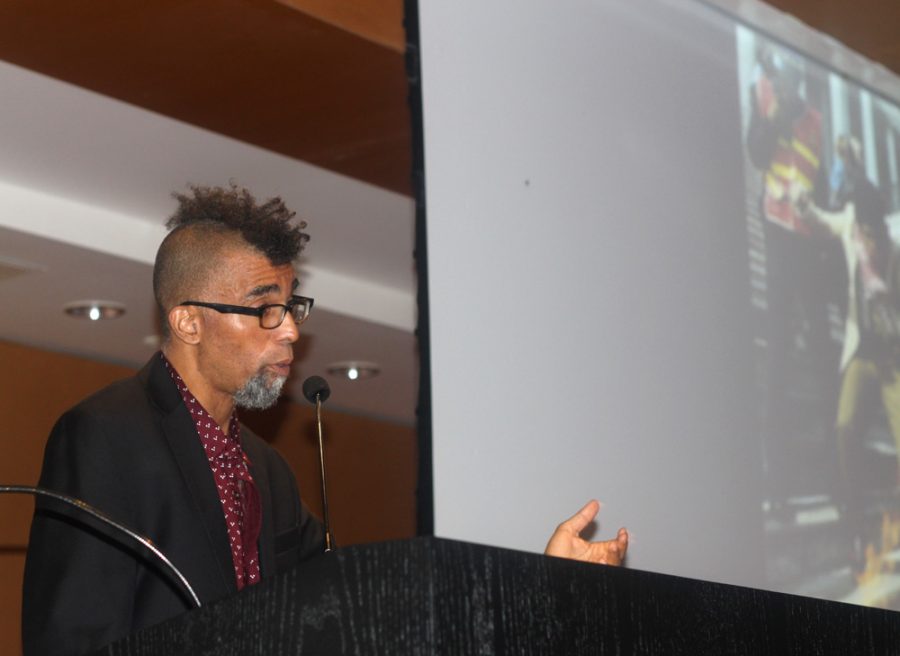 Dread Scott discusses a picture of him buring an american flag in front of the police on the Us capital in 1989 to protest social injustices in The United States, in which was ruled to be protected by the 1st amendment, as the flag was being used to display ideas.

Lighting the United States Constitution on fire and other American issues were all included in artist Dread Scott’s presentation, “The Impossibility of Freedom in a Country Founded on Slavery and Genocide” Thursday evening.

Scott has been creating art that displays issues in the U.S. since 1983.

Scott started the presentation by asking the audience questions about these issues.

During the presentation, he showed videos on the work he has done, and each video had a deeper meaning behind them.

One of his works, called “Stop,” is a seven-minute video showing six men of color from New York and the United Kingdom. Each of the men repeated the number of times they were stopped by the police. The number ranged from 20 times to 150.

The purpose of “Stop” is to send a message about how being stopped by the police is something that affects hundreds and thousands of people.

Another video Scott showed sent a message about the billions of dollars that are wasted by Wall Street every day.

In the video, Scott walked around asking people if they liked burning money while wearing a shirt with about $250 stapled to it. He burned a few bills in the video and was even questioned by the police.

After being questioned, Scott continued to ask people about burning money even though the police were still in his presence.

Scott also burned the American flag on the steps of the U.S. Capitol in one picture he showed to make a political statement.

Scott showed slides of racist letters he has received about the concept of his work.

The letters came from people all over the world, including those who are in the armed forces.

Scott said the message of his presentation overall is that the U.S. needs a revolution, and art is an important part of allowing people to see what is happening and how the world can be different.

“I think my work has been strong for quite some time,” Scott said. “Because of that, there are a lot more people that are thinking about broad things.”

Scott said his work can be included with the Black Lives Matter movement, because of how they both show people who are fighting for equal rights.

“I’ve been making work before the term Black Lives Matter was said, and I’ll be making work after the framework which people are seeking,” Scott said.

He said he is happy to be a part of a broader movement of people who are looking to specifically stop a situation where the police are shooting, choking, and beating people to death.

Scott describes living in America and anywhere else as being an overall risk.

“I think that some of my work and ideas challenge the status quo in a country that is fundamentally based on violence and separating the oppressors,” Scott said. “If I can highlight the situation in a way that brings joy and strength to people in a new understanding, asking new questions, then I’m happy to do that.”