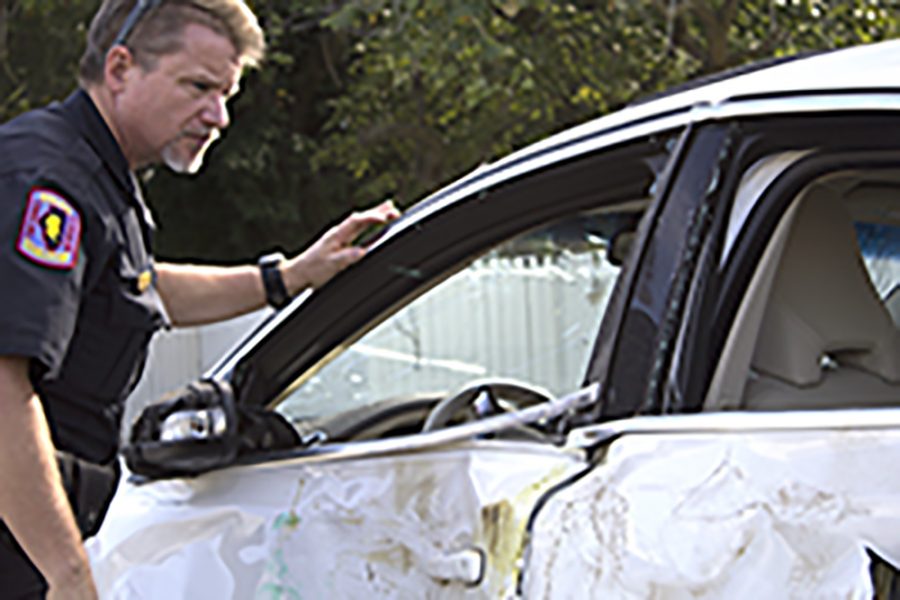 Molly Dotson | The Daily Eastern News Lt. Brad Oyer inspects a car that hit a house on Lincoln Avenue after a five-way car accident. The car ran into the house but did not go through it.

One person was airlifted to the Carle Foundation Hospital in Urbana and another taken to Sarah Bush Health Center after a five-way car accident happened around 2:07 p.m. Wednesday along Lincoln Avenue.

Charleston Detective Tony West said it appears a semi-truck lost control and hit two cars in the roadway, which caused a chain reaction where a third car was hit.

Another white car, which was parked next to a residential building was pushed by the semi-truck against the building and hit the home but did not go through it.

No one was in the white car.

Traffic around the area was backed up for at least an hour to an hour and fifteen minutes, West said.

The car hit the house of a Charleston resident named Tina, who declined to give her last name.

Tina was in the house with her family when they heard a screech, then a boom.

She thought it was just another fender bender until she heard tires screeching then two more crashes.

“I jumped up, grabbed my phone, came to the window and heard a bunch of people screaming,” she said. “Then I heard a huge crash.”

By the time she got to the window, the semi-truck had hit the car and slammed it to the side of the house.

The impact shook the entire foundation of the house.

“There’s cracks in the walls, the ceiling, everywhere throughout the house,” Tina said.

Tina said if the truck had not been parked in front of Midgard Comics, it would have went straight through the house.

The woman in the car that hit the house had gone into Shelter Insurance “two minutes” before the accident happened, Tina said.

“So if she had lingered she would have been in it,” Tina said. “It was really scary.”

Though the people in Tina’s house at the time were shaken up by the accident, especially her daughter, no one was injured in the building.

The sign for Midgard Comics, which shares an office building with Shelter Insurance, was knocked down.

Beth Greenwood, a customer service representative for Shelter Insurance in Charleston, saw what happened from her office window.

When she heard the screech, she looked out the window and saw the semi-truck hit a black pickup truck, which turned in toward the building.

“The semi just kept going through the front of our building here through the yard,” Greenwood said. “It was kind of scary, when I saw a semi barreling toward the lawn there I’m thinking, is it going to hit the building?”

Nothing on the side of the building Shelter is on was hit.

“I called 911, they were here in five minutes,” Greenwood said.

Photos from the accident can be seen here.