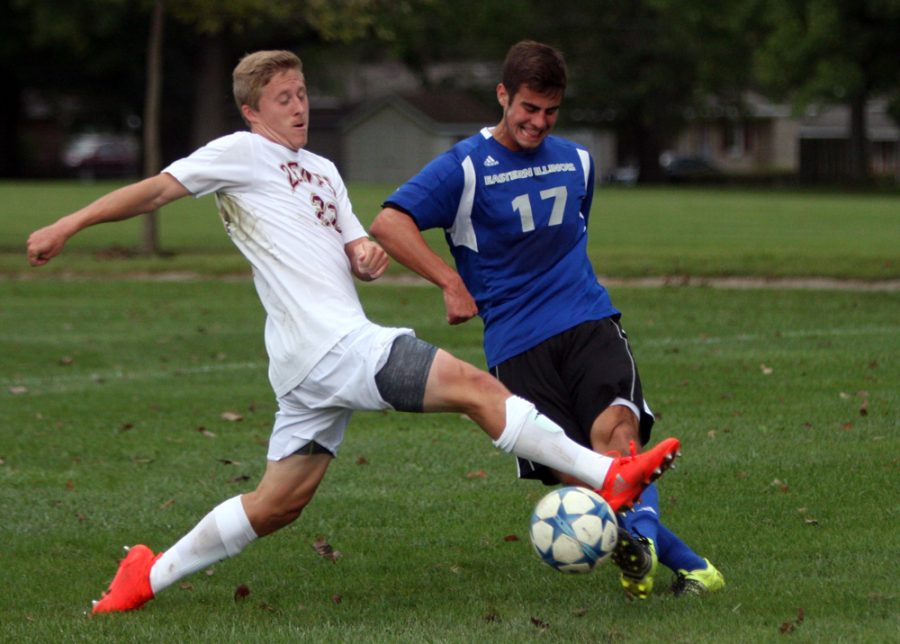 Sophomore midfielder Tyler Massa fights for possession during the Panthers' 1-0 loss to Denver Saturday. The Panthers will begin a 4-game road trip Wednesday.

The men’s soccer team will begin a four-game road trip Wednesday night as the Panthers head to Missouri State to take on the Bears.

The Panthers have struggled to find the winning touch as they are on a five-game losing streak. Eastern will have to get back in the win column on the road, where the Panthers have not been able to win this year.

With a record of 2-7-1 and 0-2 in The Summit League, a non-conference matchup would be a good place for the Panthers to find some momentum.

Missouri State comes from the Missouri Valley Conference, and they are currently 5-3-1 this year with a record of 3-0-1 at home.

They are coming off of a 1-0 victory on the road against Evansville. They have played two of the same opponents that Eastern has played this year — Green Bay and Oral Roberts.

Both teams defeated Green Bay, 2-0, but Eastern fell to Oral Roberts while Missouri State finished in a draw.

The Bears’ offense is led by Emmerich Hoegg, who has two goals including a game-winner. The leaders in assists are Jake Buckle and Scott Midgley, who each have two on the season but no goals.

Missouri State has been consistent at goalkeeping with Liam Priestley who has started all nine games for the Bears. He has a total of 19 saves this season with a goal against average of 0.65. He is responsible for four shutouts on the year.

The Bears are coached by Jon Leamy, who has been the head coach of the program for 25 seasons, making him the longest tenured coach in school history. He has had above .500 seasons in 19 of his 24 years at the school.

Eastern has been held scoreless in its previous two games, so eight players still remain at one goal for the Panthers. Freshman Yann Nsoga is the assist leader on the team with two.

Junior goalkeeper Mike Novotny has made all but one start this season and has totaled 22 saves to go along with one shutout on the year.

This will be the 24th meeting between the two schools, and Missouri State holds the 18-5 series lead over the Panthers.

The two teams met last season, and Missouri State came out on top, 3-0. The teams were once conference rivals back when Eastern was a member of the MVC from 1996-2010. Eastern has not beaten them since 2009.

Looking ahead, Eastern will travel to Omaha on Saturday for a Summit League matchup and then will head to Northern Illinois next Tuesday for another non-conference matchup.

Tomorrow’s match is set to begin in Springfield, Mo., at 7 p.m.