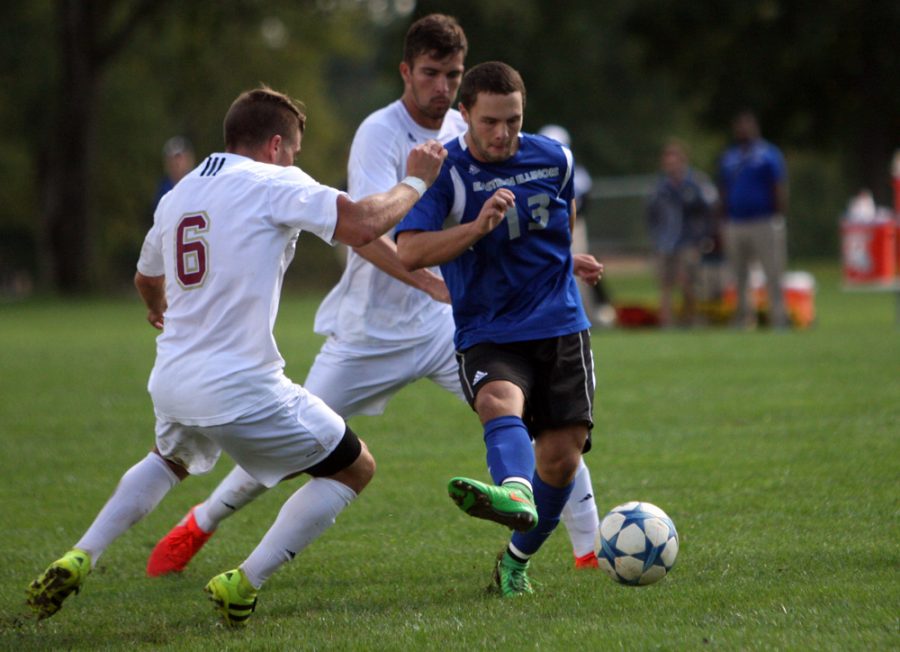 Sophomore forward Trevor Kerns battles two Denver opponents for possession of the ball during the Panthers' 1-0 loss to Denver Saturday.

The Eastern men’s soccer team’s losing streak extends to five games as a good defensive effort ended in a 1-0 loss to No. 8 Denver.

The match was played at the west practice fields because of a wet Lakeside Field from the rain earlier in the weekend. Denver remains undefeated with a record of 9-0-2, while Eastern falls to 2-7-1 and 0-2 in conference play.

Redshirt freshman Ryan Schaefer scored the lone goal in the game for Denver in the 25th minute. Schaefer was in the right place at the right time when a shot off of the crossbar rebounded right to him, and he shot it past junior goalkeeper Mike Novotny for the score. Junior Alex Underwood and redshirt junior Blake Elder assisted Schaefer on the goal.

Eastern men’s coach Kiki Lara said the goal was unfortunate for the Panthers.

“The goal came off of a mistake that we’ve been kind of working on, just an unfortunate thing, but something we can continue to work on and get sorted out,” he said.

Eastern was not able to record a shot on goal in the defensive battle, but freshman Alex Castaneda was close to giving them the lead in the third minute as his shot went across the front of the net but eventually rolled out of bounds.

Denver led Eastern 11-1 in shots in Saturday’s game guided by sophomore Andre Shinyashiki who had two shots on goal. Redshirt senior Chandler Crosswait also had a shot on goal for Denver that Novotny made the save on. Castaneda had the lone shot for the Panthers. Novotny made three saves in the game and now has 22 on the season.

Lara’s immediate reaction from the game was that his team was much improved.

“The main focus is that this team is much improved and they’re one of the best teams in the country and I thought we played very well for a large parts of the game and we’re still susceptible to some errors that just take experience and just a little bit of know how,” he said.

This is the third time this season Eastern has lost by the score 1-0. Six of the seven Panthers losses have come by just one goal. Denver is now the leader in the Summit League, but Western Illinois and Omaha are each 1-0 in conference play.

Eastern will be on the road for the next four games starting with Missouri State this Wednesday.