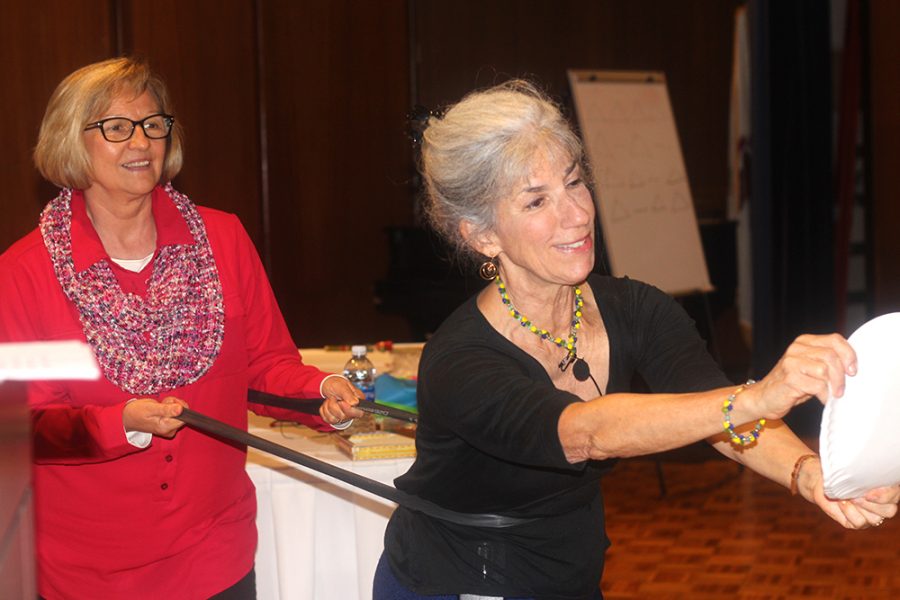 Carol Kranowitz, who wrote a book about Sensory Processing Disorder, came to Eastern to talk about how to understand children with the disorder at the annual Autism Conference Friday.

Gail Richard, interim director of Eastern’s Autism Center, along with students involved in the Autism Transitional Education Program, put together this conference every year.

Students, parents, teachers and advocates for Autism awareness come from all over to enhance their knowledge on SPD.

Pam Briscoe, Shelly Seaman and Martha Kirts are all speech pathologists who work together at South Eastern Special Education in Sainte Marie.

Briscoe and Kirts have made the hour-long trip to the conference since it began, bringing along Seaman for her first year.

“My dad was a special education teacher, and so he kind of showed me that this side, a different way of teaching, is to be a speech therapist,” Seaman said.

Briscoe said that her 4-year-old daughter is currently going through a situation similar to one Kranowitz discussed when putting on newly brought clothes.

Seaman and Kirts both agreed that being in their field of study, they are able to raise their children with a bias that may give them an upper hand.

“I use a lot of motor stuff; I know if they’re sitting down a lot, I need to incorporate a lot of sensory symptoms into their daily lives,” Seaman said.

Having this experience helps the speech pathologists have skills that others may not when dealing with children.

“People say all the time the way I play with kids is different than how they would play with kids, but to me it’s just natural,” Kirts said.

Volunteers from Eastern’s Autism Center were also at the event.

Courtney Tate, a graduate student studying communication disorders and sciences, was one of these volunteers for the event and said she works closely with Richard.

“We pay to have our guest speaker come in and attract the occupational therapists, speech language pathologists, physical therapists, all of those who come here for their continuing education requirements, and then all extra proceeds go to the Autism Center,” Tate said.

Tate has clients who have SPD and was able to relate to much of what Kranowitz was explaining during her presentations.

Tate said she hopes to be involved in this event come next year, as she is interested in the education it brings to those who want to help others as much as she does.

Cheyenne Fitzgerald can be reached at 581-2812 or [email protected]