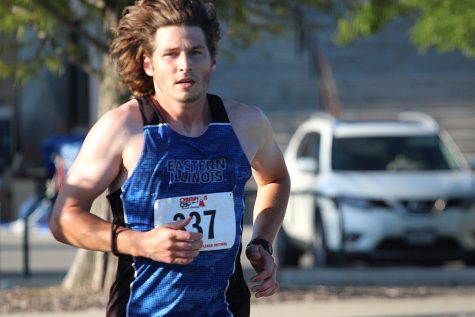 There has been two weeks between meets for Eastern’s cross-country teams, but they are set to take the course at South Bend, Ind. this Friday. The start times and the teams set to run are yet to be announced; however it is known that the race is separated into blue and gold divisions.

Both Eastern teams are feeling confident after a great start to the season finishing first in both the men and women’s divisions at the season opening Walt Crawford Open. The men’s team finished second, while the women finished fourth at the Country Financial Invite.

After the long break the team is ready to run with the likes of heavy hitting opponents such as Notre Dame and Clemson.

This will be the team’s largest meet yet, and the farthest they have traveled to compete.

It is a familiar experience for some of the veteran runners, but for the incoming freshman a meet of this size and the location will be a new experience.

Freshman Brianna Bower is treating it like any other meet.

“Even though it is further away than I am used to, it will just feel like another meet since I have done this for so long,” she said.

The top runner of the men’s five-mile was North Central College’s Zach Plank with a time of 24 minutes, 30.2 seconds, while the best time for the women’s gold 5K was Western Michigan’s Maria McDaniel with a time of 16:58.4.

Other finishers for the men included now graduated Joe Calio who finished 12th with a time of 25:09.9, just 1.5 seconds from being a top-ten time, and senior Tyler Yunk finishing 33rd.

For the women, Eastern had one top-ten finisher in junior Maria Baldwin with a time of 17:44.5.

Other Eastern runner finishes include senior Ivy Handley at 27th and sophomore Jocelyne Mendoza at 49th.

Eastern runners will try to repeat their success at the meet, while some others will look to improve upon their finish from 2015.