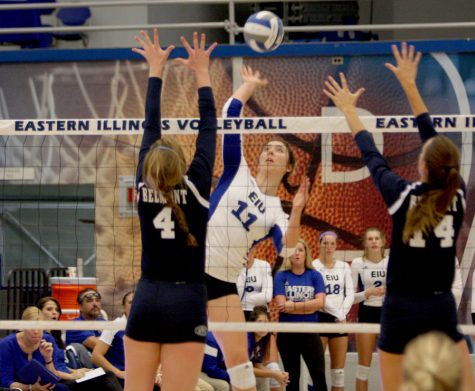 With three straight losses looming in the air, the Eastern volleyball team turns to a local rivalry for a chance at turning this season around.

The Panthers hit the road Tuesday night for a midweek matchup against the Indiana State Sycamores.

It has been anything but smooth sailing for Eastern this season, the team heads into this week with a 3-13 record on the year.

The Panthers got off to a rough start in non-conference play, winning three of their 11 games outside of the Ohio Valley Conference.

Eastern has not yet lived up to the opportunity of turning the season around in conference play, losing the first two matches against OVC opponents.

The Panthers will get their chance to earn a non-conference win against Indiana State before returning to OVC play this weekend.

The matchup against the Sycamores brings plenty of intrigue, but gives the Panthers a shot against another team under .500 on the season.

Indiana State comes into play at 6-7 this year, and much like Eastern, riding a slight losing streak.

The Sycamores have lost two straight matches coming in, but come in with a 1-1 record in the Missouri Valley Conference.

The Panthers have history on their side for this matchup leading the all-time series 19-11, but Indiana State has the last win between the two teams

Eastern was knocked off by the Sycamores earlier this season in four sets.

If the Panthers want to turn that around, they will have to limit Kynedi Nalls on Indiana State’s offensive end.

Nalls has led the Sycamores this season with 170 kills and 3.21 kills-per-set.

Eastern also faces the task of getting past Damadj Johnson on defense for Indiana State.

Johnson has totaled 55 blocks for the Sycamores this season while averaging 1.10 per set.

Luckily for the Panthers, they have some forces on both sides of the ball.

Sophomore Taylor Smith continues her productive season leading all of Division I in triple-doubles.

Her total of six not only leads the NCAA, but is just one shy of her total from all of last season.

Freshman Katie Sommer has continued to improve as the season goes along, and has proven so in recent conference games.

Sommer is averaging one block per set in OVC matches, and is tied for fourth in conference with that mark.

Another freshman has continued to carry the load on defense for the Panthers.

Maggie Runge emerged as a defensive threat early on in the season, and has continued to play at a high level with an OVC-leading 1.25 blocks-per-set.

Runge has also totaled 66 blocks on the year, and will try to control the Sycamore offense Tuesday night.

While the Panthers try to end their three-game losing streak in a non-conference match, they will return to OVC play this weekend.

Eastern will head to Southeast Missouri for its second of three games on this road trip.

That match against the Redhawks is Friday, and begins at 6:30 p.m.

But first, the Panthers try to take down the Sycamores as well as earn some bragging rights beginning at 6 p.m. Tuesday.